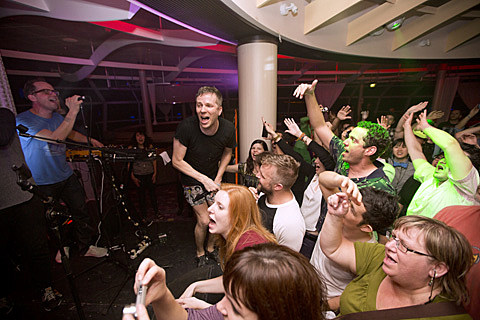 hey everybody, just announcing some dates of what we call our "punk dog tours." this means we play some smaller clubs and test out all the new songs. these often feature flashes of brilliance, moments of genius, jaw dropping profundity and total and complete utter bullshit. u can help us make a great next album by showing up and dancing to the parts u find profound and checking your phone during the utter bullshit moments.

that's how we know. generally all the songs you've come to know and love by us have been tested out on the road before, so this is a chance to get a preview of the songs that are hopefully headed to the tops of your most played lists of the future. i definitely remember the baffled looks on faces when we first tested out hits like giuliani, and well, do we have other hits? whatever the case, we've been working hard on these and we're excited to test them out.

Chk Chk Chk's "punk dog tour" kicks off in NYC at Glasslands on July 11. Eaters open and tickets are on sale now. Right after that they play the Hudson Music Project festival (tickets). All dates are listed below.

In other news, !!! recently made a mix for Thump. Says the band "this is what we've been listening to a lot lately, so who knows, maybe the new record will even sound a bit like this." You can stream that, and check out its tracklist, below...