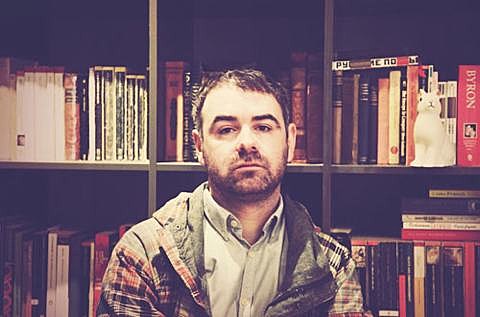 Do you think there is a general lack of musicians taking such a blatant political stance, or even addressing political issues in this manner?

SM: I might be wrong, but I can't think of anyone else. A lot of people are afraid of it, it's drummed into you as a musician that politics and music don't mix. It was alright in the sixties, it was cool then but it something you should now steer clear of. But that's partly because things like Red Wedge failed quite miserably. That was trying to sell a political idea, a political dogma - I'm not. I'm have no allegiance to any political body or movement, [in fact] I agree with elements of most of them. I've nothing to sell here. By now, the government are so adept at infiltrating these movements [like Red Wedge], they are fucking useless before they get off the ground. I think it's more important to look at the bigger picture and see the pattern that has been emerging over the past couple of hundred years where we have essentially become wage slaves, born and branded with that consumer stamp. You work, work, work, work, spend, spend, work, work and I don't believe that is the purpose of human beings. God wasn't a bank manager. I'm not religious in any way, shape or form. But as I see more structure to the universe it does become quite odd, the more science teaches you, you would think that would take you further away from the idea of a God, or a power. Obviously I don't know but certainly, I think that as a species, we've lost something that was initially intrinsic to us, a connection to the planet we live on: the animals, the tides, the moon. - [The Quietus]

Former Beta Band frontman Steve Mason will release his second solo album under his own name, Monkey Minds In The Devil's Time, on April 9 via Domino imprint Double Six. (He released ostensibly solo records as King Biscuit Time and Black Affair as well.) The record is his most mellow, organic-sounding record to date. But underneath the gentle beats and laid back delivery are some fiery politics. Call it a slow burn if you will. You can read about the album's overtly-political direction in this great interview with The Quietus and you can hear it in the album's new single, "Fight them Back," the video for which is below.

While we haven't heard anything about a full US/North American tour, Steve Mason will play Mercury Lounge on May 3. Tickets for that show go on AmEx presale on Wednesday (3/20) with the regular on-sale happening Friday, May 22 at noon.