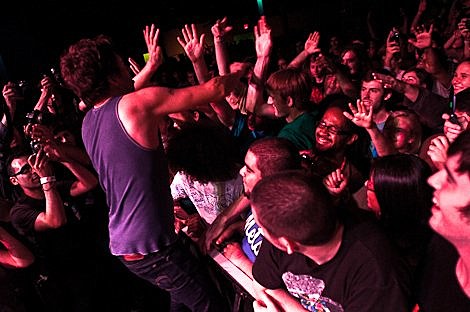 !!! play the free Pool Party show on Sunday (8/15) with support from Lee Fields and the Expressions, The Strange Boys, and Future Islands, and yet that it somehow not enough; the funk-punk troupe is ALREADY itching to get back to Brooklyn (that's good news). Along with a veritable shit ton of US dates that kick off in early September, the band will play another NYC show on October 6th just down the street from the waterfront at Music Hall of Williamsburg. Ticket info is forthcoming.

The dates follow the release (Aug 23) of the band's new LP, Strange Weather, Isn't It?, their first since the Myth Takes LP from 2007. The album's first track, "AM/FM" recently surfaced as a limited 12" single, and is featured in the Black Dice-directed video below. A second, and more recent track from that LP, "The Most Certain Sure", is streaming below.

In related news, some of the final recordings from ex-!!! drummer Jerry Fuchs (RIP) will surface on the new Maserati LP, Pyramid Of The Sun, due on November 9th, 2010 via Temporary Residence Limited.

The sudden, tragic and unexpected passing of drummer Jerry Fuchs not only forever changed the lives of those that knew and loved him (a number that stretches into the tens of thousands by all accounts), but it immediately halted progress on a new Maserati album for which they had already begun recording. As one of Fuchs' final recordings, the band labored over its completion for the better part of a year. Afforded the utmost care and attention to detail, Pyramid of the Sun stands firmly as a celebration of Fuchs' legacy, and a testament to the ever-increasing brilliance of Maserati.

Mixed with Justin Van Der Volgen (!!!, Out Hud) and Temporary Residence founder Jeremy deVine (Sonna), Pyramid includes two collaborations with friend and tourmate Steve Moore (Zombi)... Closing the album is the bittersweet "Bye M'Friend, Goodbye," a motorik summer punk jam that splits the difference between Wipers and Neu! and carries the bittersweet distinction of being one of the band's finest songs, and the final track written and recorded with Fuchs.

If it's anything like the prior Maserati material, it will most certainly be worth a listen.