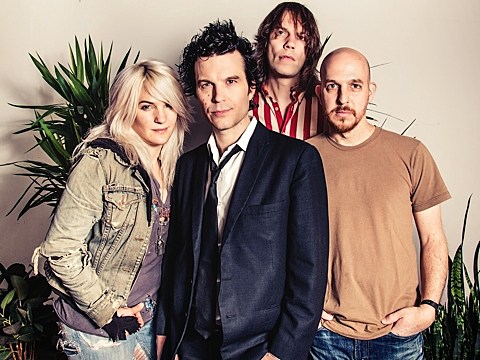 As previously mentioned, Brooklyn's 1-800-BAND are releasing a new EP, Diver Blue, next week (4/8) via Almost Ready Records (pre-order). The band are devotees late '70s power pop/new wave (think The Cars, Dwight Twilley, Cheap Trick), and the band's bio -- which is re-written overtop a vintage press release -- declares "Let's Have a Good Time" at the very top. 1-800-Band aren't looking to reinvent the wheel, they're out to have fun playing hook-and-riff-filled pop. A full stream of the EP makes its premiere in this post, and you can listen below.

1-800-BAND also have some previously announced shows coming up, including two in their hometown. The first of those is a record release show on Saturday (4/5) at Record Grouch (986 Manhattan Ave in Brooklyn). They'll have the EP on sale ahead of its release date at that show, and that one's a FREE SHOW with FREE BEER.

They also play night 1 of Brooklyn Power Pop Festival, co-presented by Trouser Press, on May 9 at The Bell House with '70s-era power pop vets Dwight Twilley and Pezband. Night 2 of the fest includes Shoes, Paul Collins and more, and you can still get tickets to either day or a 2-day pass.