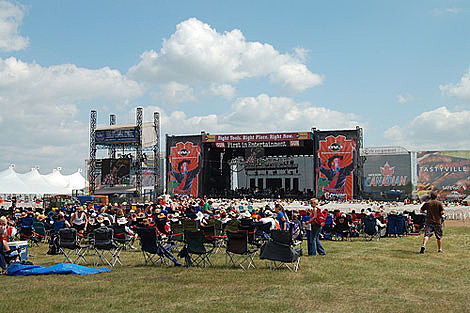 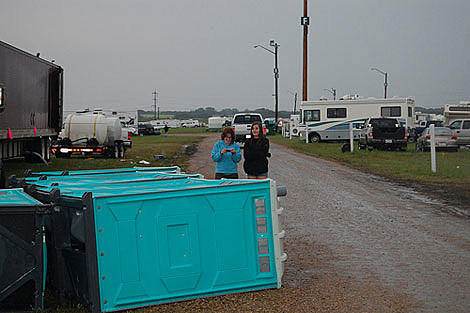 "Family has identified Donna Moore of Lloydminster as the woman killed at the Big Valley Jamboree after the festival's main stage collapsed during a severe thunderstorm Saturday.

Moore's son, Mike Tebbe, spent Sunday together with family and said he was not prepared to talk about his mother yet.

Moore was a huge country music fan who was at the festival for the weekend, said friend Warne Noyce.

"She was pumped to go to Big Valley. It makes me sick to my stomach because she was such an awesome lady," he said. "She was hanging out watching music with people she loved."...

...Stage speakers fell on Moore, crushing her, after a wind gust of about 100 kilometres per hour toppled stage scaffolding." [Calgary Herald]

The final day (Sunday) of the Camrose, Alberta festival was cancelled after the tragedy. The next band set to play on Saturday when the storm hit was Kevin Costner & Modern West (yes, that Kevin Costner).

NYC had their own storms this weekend too, causing chaos and cancellations for outdoor music, but luckily no tragedies.

Videos from Big Valley below...