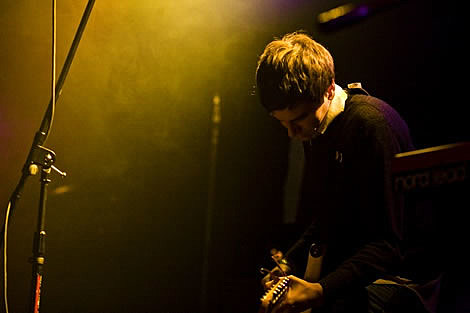 The insanity that is SXSW is about to uproot folks from around the globe, sending them to Austin for a week to see 628 bands. While there will be great music from all around the world there, we thought, being a NYC-based website, we'd highlight ten artists from our hometown we think you should check out if you'll be there. You can listen to two tracks each from each band (who's on RDIO) in our RDIO playlist, and browse the list below.

Also check out our list of 50 artists from around the world (including four of the ones here) we're excited to see at SXSW and our SXSW metal preview (including NYC's Psalm Zero), and if you're going, we hope to see you at our official showcase, Invisible Oranges' showcase, or one of our day parties!

Check out the list and stream the playlist below...

Post-hardcore crew Big Ups released their caustic debut LP, Eighteen Hours of Static, shortly after the new year via Dead Labor/Tough Love. As I said on BV Chicago, "It's a snarling, in-your-face effort but also manages to contain some somber moments too." (ZP)

The Hold Steady do have some new material we'll likely hear at SXSW, but even if they didn't, you don't really need a reason to get excited about a band with a handful of the finest punk(ish) records of the 2000s. You can catch them at the BV Saturday day party at Red 7. (AS)

Hospitality managed to avoid the sophomore slump, as Trouble might just be better than their terrific debut album. Solving the different-but-similar conundrum, the band's hook-filled songwriting and Amber Papini's thoughtful lyrics / appealing vocals remain at the core, while expanding their scope sonically.  (BP)

THE PAINS OF BEING PURE AT HEART

The Pains of Being Pure at Heart are pretty consistent with their love for '80s and '90s indie, but they don't repeat themselves, and continue to navigate new territory on their upcoming third album, a quieter record than the Corgan riffs of 2011's Belong. Here's looking forward to hearing that new stuff live at SXSW. You can catch them at the BV Saturday day party at Red 7. (AS)

While the members hail from Texas, it was living stoned and starving in Brooklyn (and Ridgewood, Queens) that made Parquet Courts the band that turned heads with the short sharp Light Up Gold. Constant gigging has made them a shit-hot live act and last year's late night bridge show was one of 2013's most memorable moments. You can catch them at the BV Friday day party at Red 7. (BP)

Psalm Zero, who we also highlighted in our metal @ SXSW preview, has quickly become a critically acclaimed paragon of experimental metal weirdness, blending in Tolkien-esque chant-like vocals with uncomfortable, stripped down, hypnotic riffing. That might not sound like a ringing endorsement, but it is. (WM)

San Fermin is led by Ellis Ludwig-Leone (who's worked with Nico Muhly on arrangements for Sufjan, The National and others), and he's jcurrently joined by Allen Tate and Rae Cassidy on lead vocals at live shows to create layered chamber pop that should appeal to fans of the work he and Muhly have done for those other artists. You can catch them at the BV Thursday day party at Red 7. (AS)

Spires make groovy, retro pysch pop that recalls both obvious '60s touchstones, as well as late '80s UK groups like The Stone Roses. If you dig Temples and Jagwar Ma, these guys will likely float your paisley-colored boat too.  (BP)

Somewhere between dark post-punk and shoegaze lies Brooklyn-via-Bay-Area band Weekend, who have learned how to conjure up a good amount of atmosphere and noise in a live setting. If you're looking for a band you can zone out to, but still bop your head, catch one of their sets. (AS)

Many folks consider Yvette to be the best new band in Brooklyn. While the powerhouse duo made a fine debut album, the gothy/industiral Process, it's their white-hot live shows -- closer to the tightly-wound tension of early Dischord bands or Liars -- that really leaves a dent.  (BP)