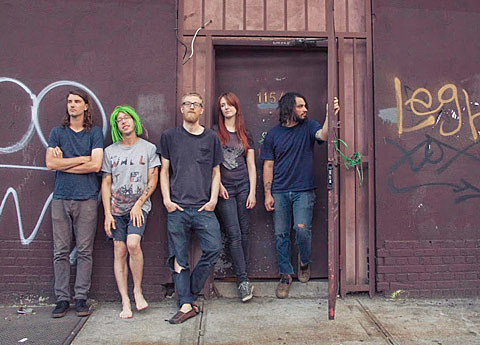 Some may not think so, but CMJ is still a festival than brings in folks from out of town: mainly college radio programmers and jocks on mid-semester vacation. While we at BV get excited about bands from out of town (and we have a separate list for that) who are here for the fest, there are also lots of local acts we'd recommend to anyone visiting NYC. Here are 10 that are worth seeing, no matter where you live.

Clicking on the artist name takes you to their corresponding page on our NYC Show Calendar with a list of all of their upcoming NYC shows. We also made a Soundcloud playlist featuring songs from all the bands. Check them out below...

Beverly: What began as a collaboration between Frankie Rose and bandmember Drew Citron (which is what their album Careers is), Beverly became a different thing entirely when Frankie moved back to California. Drew assembled a four-piece band who have become quite good live. If you like everything Kim Deal did in the Pixies and the '90s Breeders albums, they are definitely worth checking out. [BP]

Cakes Da Killa: There's not as much in the way of exciting hip hop at CMJ this year as the past couple years, but if that's what you're looking for this week Cakes is not to miss. His newest release was this year's free Hunger Pangs mixtape which had him rhyming spastically over excellent production. Fans of Mykki Blanco or Danny Brown would likely dig. [AS]

Dream Police: The Men quickly changed from a dark, heavy punk band to a country rock band, and now two of its members (Mark Perro and Nick Chiericozzi) are going in a very different direction with their other project Dream Police. The songs they've put out from their debut LP so far have been a bit more on the experimental side, with motorik beats and effected guitars, and it'll be interesting to see where else they take this. [AS]

Future Punx: When Fergus & Geronimo broke up a couple years ago, Andrew Savage focused on Parquet Courts full time; Jason Kelley, and most of the rest of the live line-up of F&G formed Future Punx, making nervy neo-new wave (think Devo, Oingo Boingo, XTC). A new EP is out soon on Dull Tools and live they're one of the more guaranteed good times in the city. [BP]

Hank Wood and the Hammerheads: If you don't pay too mention attention to NYC's hardcore scene, some of it could start to blur, but one band that you don't even need studded leather to appreciate is Hank Wood and the Hammerheads. Their organ-fueled sound is as indebted to early garage rock as it is to early hardcore, and this year's Stay Home LP is a real gem. Their only gig this week (Saturday night at Palisades) isn't an official CMJ show, but it's only 12 bucks. [AS]

Las Rosas: There is no reinvention of the wheel here, but Las Rosas make superior poppy garage-psych, with a flair for hooks, melody and arrangement. With ties to Burger Records (they play the label's free party at Death By Audio on Thursday) and a growing NYC fan base, they're sort of the East Coast version of Allah-Las. [BP]

Mitski: Mitski previously put out a couple indie/classical albums, but for her newest and first for Double Double Whammy, Bury Me At Makeout Creek, she applies her strong songwriting style to a DIY rock template more similar to DDW founders LVL UP (half of whom have been backing her at shows). In the growing local DIY scene she's part of, Mitski is quickly seeming like one of the most distinct voices. Her only show is the unofficial $5 Miscreant & Father/Daughter showcase at Silent Barn on Friday. [AS]

PC Worship: After being regulars of the local noise scene for years, PC Worship moved to Northern Spy and Dull Tools for this year's Social Rust which is their most cleaned-up, song-oriented and possibly best album to date. Their collaborative project with Parquet Courts, PCPC, will be touring with Thurston Moore this week, but there's also a PC Worship show, the Dull Tools showcase at Silent Barn on Thursday. [AS]

Sunflower Bean: Still in high school (how are they playing day parties?), Sunflower Bean sound wise beyond their years, making lightly psychedelic pop with grooving basslines and sweet harmonies. They've only released a handful of tracks online but have already headlined Glasslands. [BP]

Weyes Blood: With a set of pipes that'll stop you in your tracks, Weyes Blood (aka Natalie Mering) has been making spooky folk for some time but really came into her own on the just-released The Innocents. As good as the album is (and it is), her live show is where Weyes Blood truly mesmerizes. [BP]