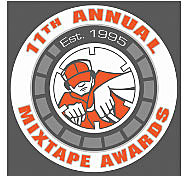 The 2008 11th Annual Mixtape Awards, honoring the most recognizable names in the music industry and mixtape genre, will roll into New York City on Tuesday, April 29th with an entirely new venue untying it from previous year's awards shows (and at an undisclosed location). Crowd-controlled guests can anticipate special guest performances from hip-hop legends Melly Mel, Afrikka Bambatta, Soul Sonic Force and other surprise performances. This unforgettable evening promises to be jam packed with more music and more celebrities than ever before.

This year's ceremony will celebrate our honorees Chuck Creekmur and Greg Watkins, founders of Allhiphop.com and honor DJs for breaking new records and artists, as well as creating promotional branding tools for indie artist and established acts.

Heralded by MTV News as "the Grammy Awards of the streets," this show will set a new standard in the world of awards shows as it is the first and only awards show to feature live online streaming, allowing fans around the world to take part in the festivities by logging onto www.themixtapeawardsonline.com and Hip-Hop's premiere website, www.thatshiphop.com. Cameras placed in selected areas of the Mixtape Awards venue will provide coverage of artists and DJs throughout the night. This ground-breaking technology will also grant as many as 2000 viewers the opportunity to interact with their favorite artists and DJs during the question/answer segment of the show. "MTVs Mixtape Mondays and Vibe's new Mixtape Awards category confirm that Mixtapes have progressed into the mainstream," stated Stacy Lynch, President of The Mixtape Awards.