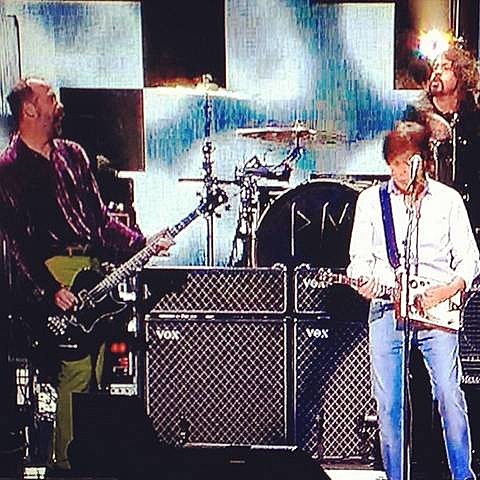 The 12/12/12 Hurricane Sandy benefit concert at Madison Square Garden went down last night and aired on multiple TV channels, websites, and in theaters worldwide. The concert featured performances by Bruce Springsteen & The E Street Band, Roger Waters (joined by Eddie Vedder), Bon Jovi, Eric Clapton, The Rolling Stones, The Who, Alicia Keys, Kanye West, Chris Martin (joined by Michael Stipe), and Paul McCartney (joined by members of Nirvana). And in between there were speeches/appearances by Billy Crystal, John Stewart, Stephen Colbert, Jimmy Fallon, P. Diddy, Chris Rock, and many more, spliced with footage of the devastation caused by Hurricane Sandy. (The less said about Adam Sandler's "funny" version of Leonard Cohen's "Hallelujah" with Paul Shaffer the better.) As was to be expected, the sets were short (though some longer than others) but it still ran late, ending after 1 AM. If you missed any of it, videos of some of the highlights are in this post.

Bruce Springsteen opened the show, getting everyone into the spirit of the night right away. Of all the sets, his choice of songs felt the most catered to the event ("Land of Hope and Dreams," "Wrecking Ball, "My City of Ruins," and of course also "Born to Run") and halfway in he prefaced "My City of Ruins" with a touching, personal speech about the damage done to the NY/NJ area, similar to the one he gave in Rochester in October.

Other highlights from throughout the show: Roger Waters ended his set by bringing out Eddie Vedder to sing lead on "Comfortably Numb." The Rolling Stones only got to play two songs ("You Got Me Rocking" and "Jumpin' Jack Flash") but still looked like they were having a great time. The Who, meanwhile, played seven songs. Then Kanye delivered a set which sent much of the twitterverse into an angry fit, though you have to wonder if this would have happened at a non-classic rock show (probably not). And of course, it was a pretty great surprise when Chris Martin brought out R.E.M. frontman Michael Stipe to do "Losing My Religion."

But the most anticipated part of the night was that Nirvana reunion with Paul McCartney on vocals that everyone was talking about. Paul ended up bringing Dave Grohl, Krist Novoselic, and Pat Smear out during his set to perform a new song they wrote, titled "Cut Me Some Slack," and then they left the stage and Paul returned to his own material. It would've been interesting to see those guys jam with Paul during "Helter Skelter" (which he opened with) or something, but at least Paul didn't sing "Smells Like Teen Spirit."

Videos and setlist from last night are below...

Dave and Krist talking about working with Paul

The Who full set

Rolling Stones
You Got Me Rocking
Jumpin Jack Flash

Alicia Keys
Brand New Me
No One

The Who
Who are You
Bellboy
Pinball Wizard/See Me, Feel Me
Baba O'Riley
Love Reign O'er Me
Tea & Theatre

Paul McCartney
Helter Skelter
Let Me Roll It
Nineteen Hundred and Eighty Five
My Valentine with Diana Krall
Blackbird
Cut Me Some Slack with Dave Grohl, Krist Novoselic and Pat Smear
I Got a Feeling
Live and Let Die