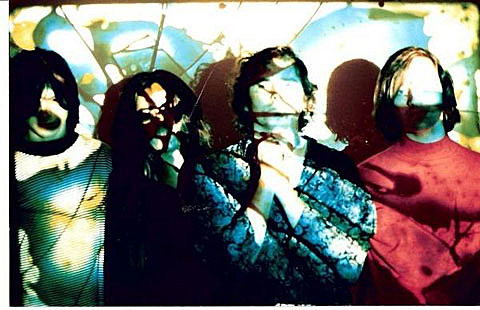 I did a double take when I saw that UK indiepop cult heros 14 Iced Bears were playing The Rock Shop on Thursday (11/11). I didn't even know they had reformed. They're associated with the jangly C86 scene (though not actually on that famed cassette) and released singles on seminal indiepop labels Sarah and Slumberland. You can download three songs at the top of this post, all of which are on the Slumberland-released singles comp In The Beginning. A little more on the band from Slumberland:

Formed in 1985 by Rob Sekula, 14 Iced Bears ably blended shambolic pop with a psychedelic punk edge that set them apart from their C86 contemporaries. Inspired by bands like the Stooges, Velvet Underground, 13th Floor Elevators and Echo & the Bunnymen, Sekula injected the then-nascent indie-pop sound with a twisted dose of noise and experimental menace. While still owing plenty to the Byrds/Ramones influences evident in the output of labels like Creation and Pink, it was this dark 60s flavor that always set the 'Bears apart. [Slumberland]

If you can find 14 Iced Bears 1988 debut album, it's an underheard classic of the era. I also really like their fuzzed-out cover of "Summer Nights" from Grease, which was my introduction to the band. If you like Pains of Being Pure at Heart, Dream Diary and Crystal Stilts, here's some OG indiepoppers making a rare, totally unexpected appearance on American shores. The band broke up in 1992 and these are their first shows since then. Highly Recommended. The band are over, ostensibly, for Popfest New England which happens this weekend, but are making a short Northeast tour out of the visit. All 14 Iced Bears tour dates are at the bottom of this post. 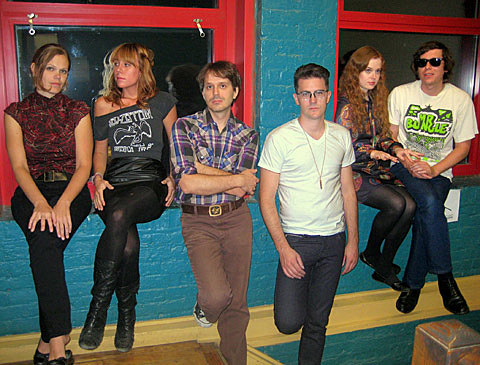 The other super-exciting this weekend is the return of Chicago's The 1900s who haven't played NYC in almost two years. They play an early show at Mercury Lounge on Thursday (11/11) and then The Rock Shop on Saturday (11/13). Their new album, Return of the Century, is pretty fantastic, somewhere between Velvet Underground and Fleetwood Mac, brimming with perfectly crafted pop. Says Chicagoist:

The 1900s have many musical precursors, but it seems unfair to name check any of them since the group has obviously labored so hard to create something of their own. And in that they've succeeded. Return of the Century is surrounded by a golden warmth, coursing through every harmony and bittersweet guitar chord. The band has mastered the art of creating a genuine atmosphere, as opposed to taking musical shortcuts to convey sentimentality, and it's impossibly not to lay back and luxuriate in the sound washing over you. Previously The 1900s excelled in mirroring sounds from the past, and the sonic dressings haven't changed, but now there's a genuine and unique beating heart giving their tunes life. It's like watching the difference between four-color print and HD TV, only through gauzy pastels.

You can listen for yourself -- the whole of Return of the Century is streaming via a widget at the bottom of this post. And if you haven't already, you can download an MP3 of single "Babies" at the top of this post. And I do urge you to go see them. The 1900s are just as skilled live, and a lot of fun too. 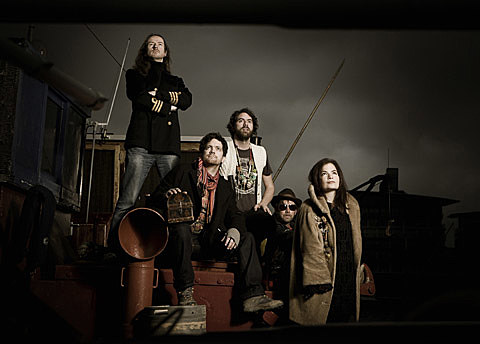 If you don't mind paying again 'cause it's a separate show, you can stick around after The 1900s play at Mercury Lounge on Thursday (11/11) and catch folky UK act Tunng. They also play Bruar Falls on Saturday (11/13). The band have gone through some line-up changes since their last album, most notably the departure of singer Sam Genders (he of the Robert Wyatt-esque voice).

Losing their singer/songwriter could prove disastrous (see: The Concretes new LP review in P4K) but Tunng's fourth album, And Then We Saw Land, is pretty good, if a little more straight-up folk pop than their previous albums which mixed acoustics with glitchy electronics. Laptops still make appearances here and there, but the new LP is breezy pastoral stuff. You can download "Don't Look Down or Back" at the top of this post, and watch the video for single "Hustle" at the bottom. The Mercury Lounge show is the first of a short North American tour, and all dates are at the bottom of this post. 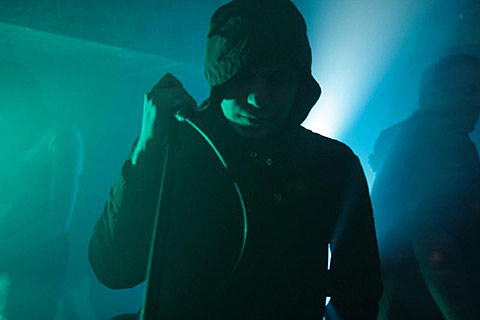 There's so much good music coming out on Captured Tracks lately much of it in single form. If you haven't heard Craft Spells' "Party Talk" or Soft Moon's "Breath the Fire," you should definitely seek them out. Don't forget about Blank Dogs, the musical alter ego of C/T major domo Mike Sniper. Blank Dogs new album, Land and Fixed, has come a long way from the murky, effects-overload of their early EPs into new sonic clarity. There's still a lot of delay and chorus effects but it no longer sounds like it was recorded in a bog. If you like the weirder side of early Mute Records (Fad Gadget seem a big influence), or the dark pop of Ohio cult legends My Dad is Dead, give BD's new album a listen. It's pretty good.

Really more of a studio thing, the Blank Dogs Live Experience has been a bit more of a mess, but Sniper has formed a new power trio version of the band and given the strength of the last few records it may be time to revisit. They play Friday night at Glasslands as part of a really good bill. Also on the bill: Mississippi's Dead Gaze (super-catchy bedroom recorded pop, check out an MP3 above); Swimsuit (new band from Fred Thomas of City Center/Saturday Looks Good to Me); and the jangly psych-pop of Minneapolis  Velvet Davenport (who also play Shea Stadium on Saturday [11/13]).

That's the main stuff this week. A few more picks, night-by-night, of things not covered above.

I'd kind of forgotten about Favourite Sons who haven't released an album since 2006's underrated Down Beside Your Beauty. But after a dormant period they're about to release it's follow-up, The Great Deal of Love, and play Union Pool tonight. (Watch a video of the title track at the bottom of this post.) Singer Ken Griffin, who sounds a little like Ian McCulloch, fronted the excellent but mostly forgotten '90s band Rollerskate Skinny (seek out 1996's Horsedrawn Wishes, it's a lost classic).

Tonight at Bruar Falls is what is likely Pursesnatchers' last show for what will likely be a while, as Doug Marvin and Annie Hart are expecting a bundle of joy any second. They're on at 8PM and it's FREE.

Sci-Fi surf legends Man or Astroman?land at Bowery Ballroom. If you can't make this show, they beam over to Music Hall of Williamsburg on Saturday. Will they play their cover of the MST3K theme?

Obits play the first of two nights at Knitting Factory. (Tickets.) Expect lots of awesome new material as their second LP for Sub Pop is in the hopper. Opening are Shark? and Forgetters. They also play Saturday with Bottomless Pit (ex-Silkworm) and Black Helicopter.

Magic Kids are back in town, bringing their syrupy-sweet sunshine pop to Mercury Lounge. (Tickets.) It's a good show all around, with Big Troubles and Bosco Delrey opening. Magic Kids also play Silent Barn on Saturday (11/13), again with Bosco Delrey, but also Fergus & Geronimo, Sweet Bulbs and Phone Tag.

A reminder from above, Velvet Davenport play Shea Stadium tonight and the show is with Big Troubles, Silent Diane and Sacred Harp.

Crystal Stilts and The Beets play for free at Brooklyn Bowl. 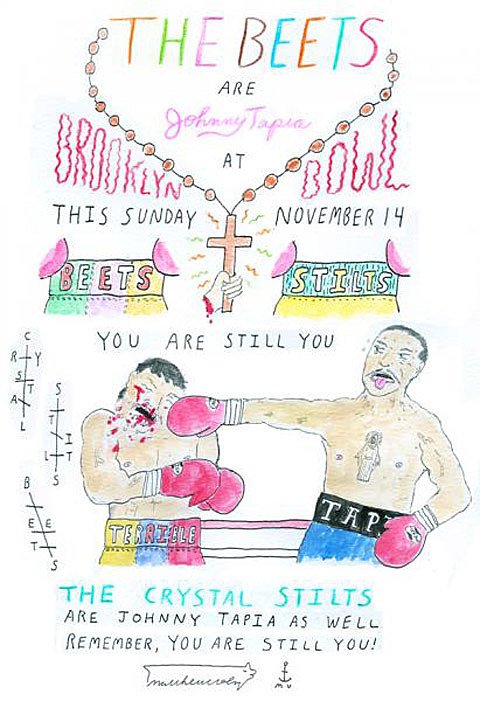 And that's really it. Flyers, tour dates and videos below. 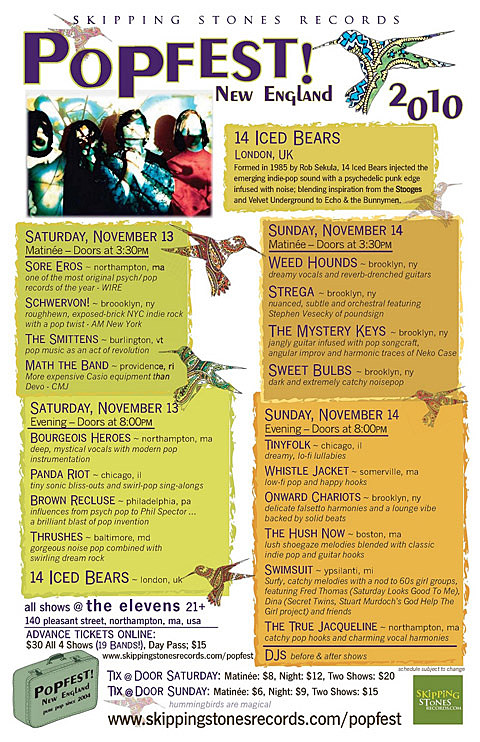 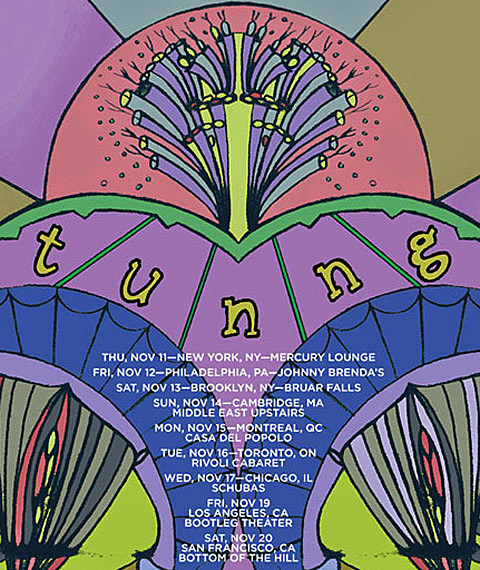