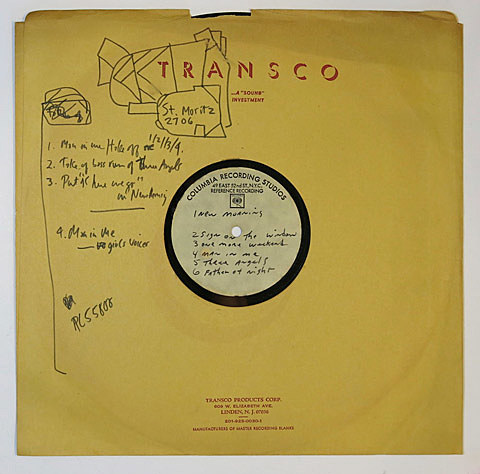 Bob Dylan fans, take note, a treasure trove of never-before-heard early/alternate/unfinished versions of songs from Nashville Skyline, Self Portrait and New Morning were recently discovered via 149 acetates found in a closet at 124 W. Houston St. That building once housed a ground-floor studio where Dylan recorded from 1969 - 1972. The two boxes of acetates was labeled "Old Records" and untouched for 40 years. Record Mecca's Jeff Gold details some of the finds:

We discovered many of the acetates were unreleased versions of songs, in some cases with different overdubs, sometimes without any overdubs, many with different mixes, different edits and in a few cases completely unreleased and unknown versions. There are outtakes too, including electric versions of Johnny Cash's "Ring of Fire" and "Folsom Prison Blues" recorded during the Self Portrait sessions, and a gospel tinged version of "Tomorrow is Such a Long Time" recorded during the New Morning sessions.

If you're not sure exactly what an acetate is beyond "some kind of record," Gold explains...

Acetates are individually cut on a lathe in real time, in a process that is basically the reverse of playing a record. A blank aluminum disc coated in lacquer is put on a turntable, and the master tape of a recording is played, the signal of which is sent to a heated needle which cuts a groove into into the revolving disc. Acetates are made so an artist or producer can listen to a recording that is a work-in-progress; they can be played on a regular turntable, but after 20 or 30 plays the sound quality begins to deteriorate.

You can read and see more about the Dylan acetates over at Record Mecca and they have a few for sale as well, including an alternate version of "Nashville Skyline" priced at $7000.