This week in heavy music, we got the excellent new For Your Health album (read my review/interview), as well as albums from Swampbeast, Ad Nauseam, God Is An Astronaut, and more, plus tracks from Oryx, Enforced, Skeleton, Paysage D'Hiver, Conan, Nightfall, Incisions, Thirdface, Loathe, and more. Read on for those and more, plus a short review of the killer Malice At The Palace EP that dropped last week...

MALICE AT THE PALACE - MATP A.D.

Florida metallic hardcore band Malice at the Palace released two demos in 2014, followed by a split with Jesus Piece on Bridge 9 in 2017, and now they've released their first proper EP, MATP A.D. All three of its songs were previously recorded for their demos, but these new versions are crisper and tighter and it's hard to see why this EP has been stirring up some buzz. All three songs are pit-starters that make us really wish we could see this band live, but until then, they sound pretty damn good in headphones too.

Denver sludge metallers Oryx will release their new album Lamenting A Dead World on April 30 via Translation Loss. It features contributions from members of other great bands in Denver's metal scene (Primitive Man, Blood Incantation, etc), and Erika Osterhout (Scolex, Chthonic Deity) contributes guest screams to first single "Misery." It's a nine-minute song that's as accessible as it is crushingly heavy, and it's very cool stuff.

Richmond thrashers Enforced have shared another taste of their anticipated new album Kill Grid (Due 3/12 via Century Media), and "Curtain Fire" is another scorcher. It gives you everything you want from punk-informed thrash, and it makes this decades-old genre feel fresh.

Austin blackened punks Skeleton are set to follow their 2020 self-titled debut LP with their sophomore LP in 2021, but first they've put out this brief EP with four new grimy rippers (and an ambient intro). According to the EP description, "while a couple tracks on Ordainment Of Divinity will return in mutated form later, the others remain intended specifically for this release."

Swiss black metal act Paysage d'Hiver's Im Wald was one of our favorite metal albums of 2020, so we're excited to learn that he's already set to release another new album, Geister, on April 23. First single "Bluet" is raw and gnarly as you'd hope from this great artist.

UK sludge metal greats Conan are releasing a new live album, Live at Freak Valley, on March 12 via Napalm Records, and you can get a taste with "Hawk As Weapon," which gives you a very good idea of how intense this band is on stage.

Greek metal vets Nightfall have shared the third and final single off their upcoming album At Night We Prey, which arrives 3/5 via Season of Mist. "Giants of Anger' is about Wilhelm's II (the last German emperor) struggle with Erb's palsy, and the mental challenges he underwent to overcome it in a world where royal blood ought to be healthy," says vocalist Efthimis. "The song is carrying the frustration and reminds us all that mental disorders make no discrimination."

Amid theories regarding their identity, Deathpact — the ever-mysterious, "anonymous" producer who's collaborated with the likes of Zeds Dead, Rezz, and Odesza — has returned with a brand new remix series of their not-yet-released song "ID." The newest one is by Code Orange, and you can read more about it here.

UK hardcore band will release their sophomore LP BLISS on 4/2 via TNSrecords, and new single "Fuck The World" is a furious, anti-fascist rager. Read more about it here.

THIRDFACE - "NO REQUIEM FOR THE WICKED"

Nashville hardcore band Thirdface have shared a killer new track off their upcoming debut LP for Exploding In Sound, and you can read more about it here.

TRIGGERMAN - A PLACE IN THE SUN SIDE 1

West Coast melodic hardcore band Triggerman (who shared members with Ignite, No For An Answer, Social Distortion, and other bands) were originally around from 1989 to 1995, and then in 2012 they released the new album Learning To Lie with previously-unrecorded songs they had written in the '90s, and now they're releasing an entirely new album, A Place in the Sun, on May 14 via Programme Skate & Sound. "We took the approach of 'what kind of hardcore' music should dudes in their late 40s write?,'" vocalist Joe Nelson told No Echo. "We really wanted to take the hardcore formula which was the foundation of Triggerman back in the day, and push its boundaries." You can hear that coming through on these four songs, which make up side 1 of the new album. The album also has a few cool guests: Matt Caughthran (The Bronx, Mariachi El Bronx), Peter Cortner (Field Day, Dag Nasty), and the Long Beach Youth Chorus.

More '90s-era hardcore: Reno's metallic Fall Silent are set to return with a new album called You Knew I Was Poison on Revelation Records, and the first taste is the absolutely apeshit "Two Plus Two Is Five," which vocalist Levi Watson told No Echo is about the problematic ways people base laws and morals around stories in the bible. "This song mentions some of the most ridiculous biblical stories and then counters these statements with the chorus 'and two plus two is five,' which we all know is ridiculous; like many of the stories in the Bible."

Sera Timms of metal bands Black Mare, Ides Of Gemini, and Black Math Horseman has a new goth-pop solo project, LXVURI, and her first single is the creepily catchy "Headlights."

Brooklyn post-hardcore/screamo band Closer have shared a second song off their upcoming sophomore album Without One Stem (due 3/12 via Lauren Records), and compared to the slow-burning lead single "Angry Flood," "Landslide" (which is named after the Fleetwood Mac song) is more of a whiplash-inducing, punk-inspired song. It's a ripper.

Vladimír Pavelka of Czech black metallers Cult of Fire is releasing a new solo album, Spomienky, on February 26 via Beyond Eyes. First single "Túra na Čachtický hrad" is seven and a half minutes of melodic, triumphant-sounding post-black metal, and it's a very promising taste of this LP.

LOATHE - THE THINGS THEY BELIEVE

Loathe took the world of heavy music by storm last year with their metalcore-meets-Deftones LP I Let It in and It Took Everything, and over the weekend they released a new instrumental ambient LP, The Things They Believe. Read more about it here.

Shop exclusive vinyl variants and more in the BrooklynVegan store: 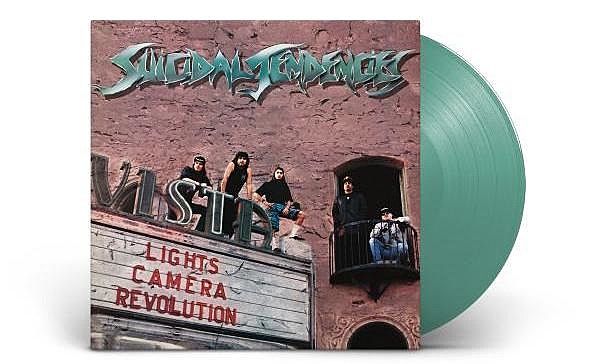