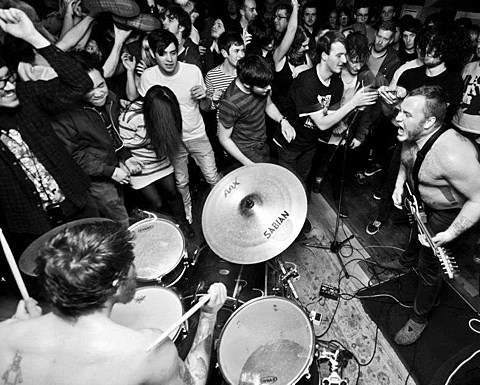 One of the earliest bands to emerge out of the emo revival is Lancaster, PA duo 1994!, who debuted with mathy Kinsella-style riffs on 2008's Thank You Arms and Fingers and got progressively noisier. Lately, we've been hearing more from guitarist/vocalist Chris Diehm's other bands, Quit, Thin Lips and Year of Glad, but that will change soon. Today, 1994! announced that they'll play their first Brooklyn show in years on August 12 at Shea Stadium with The Beds (noise punk from Snowing/Street Smart Cyclist members), Entia and Clean Girls. That show is $8 at the door. It's 1994! and The Beds' only announced shows at the moment.

Being that the show falls right in the middle of Thin Lips' tour with Cayetana and Chumped, that may mean Chris isn't playing with them on that tour (or at least not all dates). That tour includes a BV-presented show on August 15 at Baby's All Right (tix).

The other half of 1994!, drummer/vocalist Mike Kuhn, also has the industrial rap project NAH, whose most recent release is the "Submission" / "Excruciate" single on Ranch (same label as The Beds and 1994!). Listen to that below. The day after the Shea show, NAH plays Trans-Pecos (8/13) (tickets).

In related news, there are also members of Snowing/Street Smart Cyclist (and Algernon Cadwallader) in Dogs On Acid, whose tour with Spraynard soon hits Shea Stadium (7/16). Tickets for that show are still available.

Spraynard's new album, Mable, comes out this Friday (7/10) via Jade Tree and it's now streaming in full. Listen below (via Stereogum).