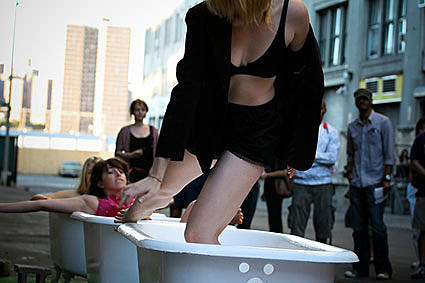 I've always liked the DUMBO Arts Under the Bridge Festival. I don't get "Down Under the Manhattan Bridge Overpass" that often, so it's always a good excuse to visit the neighborhood. The art-stuff ranges from painting & photograph galleries, to political messages, to random people doing weird things in the street. DUMBO is always getting better - for instance Galapagos is moving there, and it's always getting worse - do any artists even still live there? Even with all the real estate development though, I still like to think of DUMBO as a progressive place - not the kind of neighborhood to overlook a blatant act of animal cruelty happening right on their own streets..... 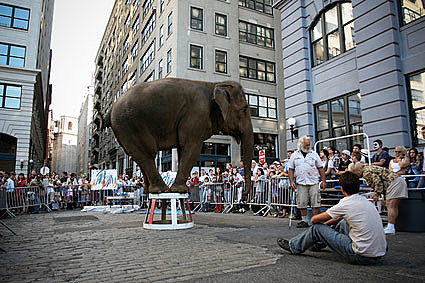 Then again, according to the elephant art academy's website, they are actually working AGAINST elephant cruelty. So, who knows.

And in somewhat related news.....

A production of Shakespeare’s “Macbeth” will replace a hip-hop festival next summer in a DUMBO venue controlled by the Brooklyn Bridge Park Conservancy — and organizers of the rap show believe that race played a role.

The Brooklyn Hip-Hop Festival — which brought thousands of people and big-name rappers to the park-and-condo waterfront development site in 2006 and 2007 — had already scheduled its 2008 production for the weekend of June 22.

But organizers were shocked last month to discover that the Brooklyn Bridge Park Conservancy had given those days to St. Ann’s Warehouse to stage a Polish rendition of that Scottish play. [The Brooklyn Paper]

The festival site doesn't mention the controversy. Maybe they'll get a different date? If not, hopefully they'll find a new location - one where the parents won't be freaking the f*uck out.