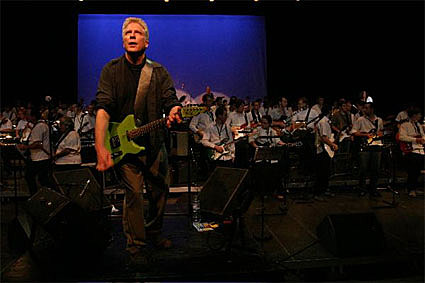 They needed 100 guitarists total for the performance in PA. They need 200 for the one coming up in NYC....

In 2005, the New York composer Rhys Chatham was commissioned by the city of Paris to write a piece of music. The result was A Crimson Grail, a work for 400 electric guitars, which premiered at the basilica of Sacré-Coeur for La Nuit Blanche, an all-night arts festival. For its first U.S. performance, the work has been extensively revised by the composer for an outdoor performance at Lincoln Center's Damrosch Park, to suit the dynamics of the park's outdoor acoustic. A Crimson Grail will call on the talents of 200 guitarists (including 16 electric bassists), who will be selected from an applicant pool drawing on the many talents of musicians in New York City and beyond.

Requirements for performing in A Crimson Grail:

1. It is necessary to be a competent guitarist with at least a rudimentary comprehension of standard musical notation. A bit of basic music reading is involved to be able to perform. All musicians participating will be assigned to one of four sections, each of which will have their parts provided in simple written notation and textual instructions, and explained by section leaders.

2. You must be able to commit to attending all three rehearsals, and all 12 hours of rehearsal time. Rehearsals will be held at a Manhattan location to be announced later, tentatively scheduled for 6 to 10pm on each of the following days: Tuesday, August 12; Wednesday, August 13; and Thursday, August 14.

3. This may sound obvious, but you must be able to commit to attending a day-long rehearsal/sound check and the performance on Friday, August 15. The approximate performance time for A Crimson Grail is 8pm, on a multi-artist show that begins at 7pm. You and your equipment will need to be in place prior to the start of the concert. The performance is outdoors, with guitarists on the perimeter of Lincoln Center's Damrosch Park, West 62nd Street between Columbus and Amsterdam. A rain location will be planned.

4. Each guitarist must bring his or her own equipment for all rehearsals and performance. This must include: an electric guitar or bass of good quality that stays in tune; a good quality amp (having a power rating of not less than 50 watts); a guitar jack (20 foot minimum); a guitar strap; a digital guitar tuner; a guitar stand; and a string changer. At the composer's request, you will need to re-string your guitar, guitar strings provided by D'Addario (www.daddario.com). Please note the following restrictions: No acoustic guitars. No hollow body electrics. No vibrato or whammy bars.

5. Sorry, but no beginners. Professional and semi-professional musicians will be given preference over amateurs.

6. This is an all-volunteer event. Due to the size and scale of the event, there are no fees or expense reimbursements for participating guitarists. The experience of being part of a once-in-a-lifetime performance...priceless.

Deadline to Apply: All applications must be received electronically no later than June 15, 2008.

Notifications: All guitarists/bassists selected will be notified by July 15, 2008.