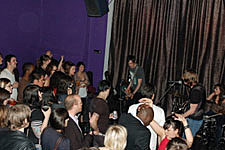 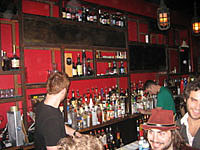 Rififi seems to be doing okay for now, but 200 Orchard isn't having the same luck...

On Wednesday 17th of October the New York State Liquor Authority denied the application to transfer the liquor license from the old Orchard bar to 200 Orchard on the grounds that it was not in the best interests of the community. This is not an application for a new license, just a basic transfer of an existing license that has been in effect for the last 12 years. We have been open since Feb 2007, under a temp license issued by the SLA and in those 8 months we have not had one 311 complaint, no noise complaints, and have not had any fights in the bar. We have been actively supporting all of the arts in the community. A community that is being robbed of its identity by huge corporations. We ask you to sign this petition, which will be presented to the SLA, not only to support our bar but to support the survival of the Lower East Side as we know and love it.
Thanks
All at 200 Orchard

200 Orchard has been growing in popularity - in the electro/dance scene especially. If you don't want it to close, sign their petition.