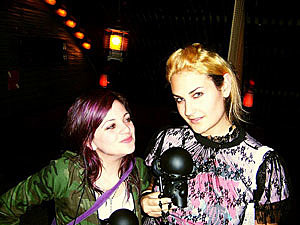 "Sarah Lewitinn, a k a Ultragrrrl, raked in three awards. She won the people's choice awards for best deejay and best party — the Stolen Transmission party she throws with fellow blogger Karen Plus One. The duo — known as Tarts of Pleasure — also won best promoters." [NY Post]

"Last night were the Paper Magazine Nightlife Awards. Karen and I won the most awards of the night... 3 in total, and we have you guys to thank for that! We were psyched, but it seemed as if NOBODY knew who we were, which was funny." [Ultragrrrl]

"...the key difference seems to be friendship. our little group (consisting of the stolen transmission crew, the misshapes, thomas, junior sanchez, josh m, sandra, scott, jenny, rob hitt, etc etc) were the loudest in the room. every time a friend was nominated, we cheered. every time one of us won an award, we thanked the rest of the pack. you didnt get that with the old schoolers." [Karen Plus One]

"another oudoor brunch. then the paper nightlife awards where i saw michael stipe wear a parakeet costume. watched a crazy cabaret performance by the citizens band." [Daily Refill]