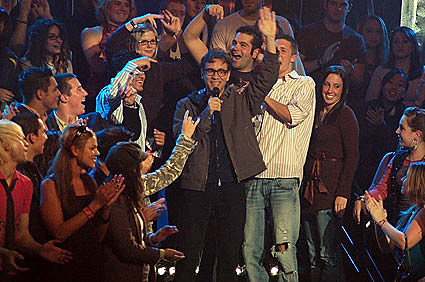 I was one of the many bloggers in attendance at this year's mtvU Awards @ Roseland Ballroom in NYC on Wednesday night (October 25, 2006). I wasn't live-blogging it, but I was taking pictures so I could blog about it right now.

Highlights included a 2-song performance each, by Beck and TV on the Radio, and entertaining presentations by Lady Sovereign, Ghostface Killah, Lupe Fiasco, Gogol Bordello's Eugene Hutz, and SNL comedian Fred Armisen (last year the real Lou Reed presented an award - this year the fake one).

JARED LETO WITH A WOODIE 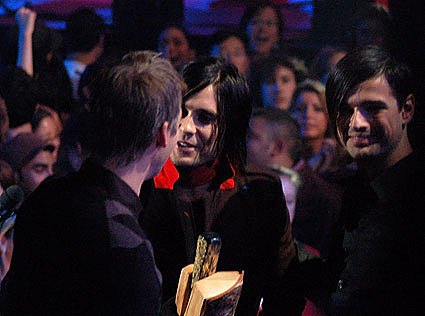 Low points: the major-label dominated "College Students' Favorite Emerging Artists" nominee list and the resulting list of winners -- that includes Jared Leto's band 30 Seconds to Mars taking home the award for "best live action video" ("The music video that's so incredible, we'd watch it even without the music"). Admittedly I haven't even see the winning video, but it's so easy to hate the fact that Jared Leto is being awarded for his music, that I'll just go with it.

More importantly though -- the real Jared Leto 'live action' wasn't actually caught on tape (or was it?). And it came in the form of Angel Face's interaction with two prominent crowd members: one music-obsessed actor, and one (like myself) music-obsessed blogger. According to multiple sources, and while I wasn't looking, Jared Leto both started a fight with Elijah Wood AND injured Stereogum's blogging finger. Possibly due to an impending lawsuit, Stereogum's review of the show doesn't mention the account.

The awards air on TV and online in a few days.