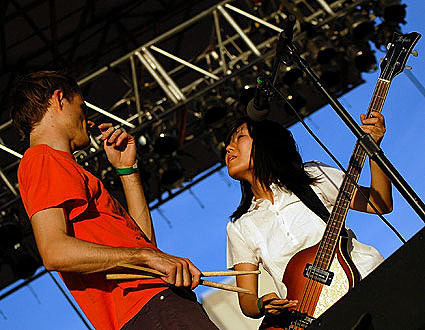 JellyNYC, the company behind the free summer concerts at McCarren Pool in Brooklyn, have this to say

We will be producing nine consecutive FREE Sunday concerts at The McCarren Park Pool bordering Williamsburg and Greenpoint Brooklyn. Get ready to slip 'n' slide, get stung in the dodgeball pit, get fat on burgers and beer, and listen to some of our favorite bands in the the summer sun.

JELLYNYC will also be co-producing three other dates at the McCarren Park Pool, including a benefit for the Open Space Alliance (OSA) on June 10 (ticket cost will be no higher than $15), a FREE show on June 21st celebrating the first annual Make Music New York Festival, as well as a FREE event with our dear friends The Brooklyn Brewery in mid September--Brooklyn's own Roctoberfest. For those of you who don't know, in Germany Octoberfest starts in September.

Depending on who ends up playing, PoolAid may or may not be happy - they like free events, but they "want to see everyone in the neighborhood attending events at the pool, not just hipsters".

Of Montreal was one of the big bands that brought "hipsters" to the neighborhood last summer. Insert your skinny dipping joke here. Of course that would require water.