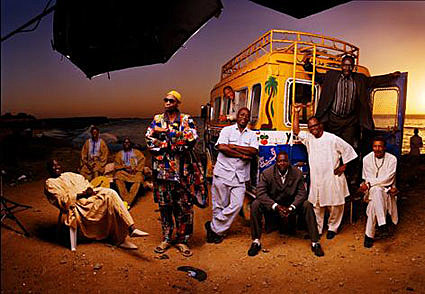 Brooklyn, April 22, 2008--BAM and MetroTech Center announce the 2008 BAM Rhythm & Blues Festival at MetroTech. In its fourteenth year, the festival continues to feature the legends of R&B and world music--and the genres' vibrant and innovative newcomers--headlining ten free outdoor concerts every Thursday from June 5-August 7. These lunchtime performances (noon-2pm) will be held at MetroTech Commons, located at the corner of Flatbush and Myrtle Avenues. For more information, call BAM Ticket Services at 718.636.4100 or visit bam.org.

Event Producer Danny Kapilian said, "The 2008 BAM Rhythm & Blues Festival at MetroTech is another great lineup of R&B talent, none of whom have performed here before. Somi, Brooklyn's African jazz/soul/gospel fusion artist will be a guest vocalist with the terrific guitarist and bandleader, Blue Note artist Lionel Loueke. We have a star of 1990's R&B--Oleta Adams; two stars of contemporary R&B--Leela James and Brooklyn's own Alice Smith; the legendary singer Phoebe Snow; and finally the pioneering funk jazz bassist/composer/bandleader Meshell Ndegeocello. The new young sensation Ryan Shaw joins Chicago legend Otis Clay for a generational battle of old-school soul; The Skatalites are a living history of ska and reggae; Orchestra Baobab are the Buena Vista Social Club of Senegal in West Africa; and finally one more legend, the soulful folksinger Richie Havens, will be joined by the young actor/guitarist/singer Marcus Carl Franklin--who portrayed one of the "six Bob Dylans" in the recent hit film I'm Not There--appearing in the film with Richie Havens! A very special summer of new BAM rhythm and blues concerts are coming to downtown Brooklyn, and I'm very excited about it."

Lionel Loueke with special guest Somi
Thursday, June 5, noon-2pm
Hailing from the Benin, West Africa, the remarkable Brooklyn-based guitarist Lionel Loueke made stops at the National Institute of Art in the Ivory Coast, the American School of Modern Music in Paris, and the Berklee College of Music in Boston on the way to appearances on high-profile recordings with Terence Blanchard, Angelique Kidjo, Charlie Haden, and most notably Herbie Hancock. Two years ago, Loueke became a fulltime member of Hancock's band and both Hancock and fellow legend Wayne Shorter appear on Loueke's debut CD Karibu on Blue Note Records. Somi is a fast-rising Afropop/soul/jazz vocalist and songwriter also from Brooklyn.
Double bill

Otis Clay and Ryan Shaw
Thursday, June 12, noon-2pm
This is a dream 1960's/1970's soul double bill spanning two generations.
Otis Clay made most of his best-known records in Memphis during the early '70s, but he's still universally hailed as Chicago's deep soul king. In a city filled to overflowing with legendary blues artists, Clay has become the proud standard-bearer for Chicago's enduring soul tradition. Clay's great hits include 1968's "She's About a Mover," and 1972's "Trying to Live My Life Without You," later covered very successfully by Bob Seger.
Born December 26, 1980, in Decatur, GA, to a deeply religious family, Ryan Shaw began singing in the Pentecostal church when he was only three years old. In 1998 he joined the cast of Tyler Perry's I Know I've Been Changed, moving to New York. A demo recording got the attention of Columbia Records, and in 2007, This Is Ryan Shaw was released, a hip-shaking collection of covers from artists like Wilson Pickett, Bobby Womack, and Jackie Wilson, as well as some original songs.

The Skatalites
Thursday, June 19, noon-2pm
More than a band, The Skatalites are an institution, an aggregation of top-notch musicians who didn't merely define the sound of Jamaica; they were the sound of Jamaica in the '50s and '60s. Although the group existed in its original incarnation for less than 18 months, members brought their signature styles to hundreds upon hundreds of albums. The instrumentals were the group's glory. Songs like "Guns of Navarone," "Phoenix City," "Addis Ababa," "Silver Dollar," "Corner Stone," and "Blackberry Brandy," to name a small handful of their most seminal cuts, not only defined the island's sound, but created a whole new genre of music-- ska. The group has often been quoted as saying their invention of ska was never intentional, but merely the byproduct of their flawed attempts at American R&B. But this self-deprecating explanation neglects the jazz and big band swing sound that was also crucial to ska in its original form. And anyone good enough to play in those styles would have little problem mastering R&B.
What the Skatalites actually did was drag these older styles into the contemporary scene, merge it with modern R&B, and propel it into the mainstream via a faster syncopated island beat. And with it, the group's musical legacy spread around the world and across generations. Decades on, their music remains timeless.

Orchestra Baobab
Thursday, June 26, noon-2pm
From inauspicious beginnings in the 1960s as the house band at a Dakar club for government officials, Senegal's Orchestra Baobab, named for the club (which in turn took its name from the native baobab tree), went on to become one of the greatest and most important bands of world music, with an influence that extended far beyond their national boundaries, throughout West Africa and into Europe. They have a strong Cuban influence--Cuban music had been a prevalent sound throughout West Africa since the '40s, imported by sailors and played on the radio. Over the past decade, Orchestra Baobob have played dates around the globe and have recorded critically acclaimed albums for Nonesuch Records produced by international star Youssou N'Dour--the man who knocked them off the charts decades ago.

Oleta Adams
Thursday, July 3, noon-2pm
Being the daughter of a minister, it's no surprise that Oleta Adams' roots are in gospel, but her formal introduction to the masses began rather unexpectedly. While performing in a Kansas City hotel, she was discovered by Curt Smith and Roland Orzabal of Tears for Fears, and she was invited to participate in the recording of the British band's follow-up to the immensely popular 1985 album Songs from the Big Chair. When Tears for Fears unleashed the long-awaited The Seeds of Love in 1989, listeners were taken aback by the soulful female voice that was prominently featured on the album. In 1990, Tears for Fears produced Adams' debut, Circle of One, which featured the #1 hit "Get Here." She remains one of the finest singer/songwriters in contemporary soul and R&B.

Leela James
Thursday, July 10, noon-2pm
"Music," the first song and lead single from Leela James' first album A Change Is Gonna Come, reminisces about Aretha, Gladys, Tina, and Chaka. James doesn't see her inspirations merely as artists to mimic; she sees how they learned from the past and applied it to the present. Kanye West, Raphael Saadiq, Chucky Thompson, James Poyser, and even James Mtume are in on the action. There's plenty of thematic range, whether there are blue lights in the basement, tears on the pillow, sweat on the dance floor, or sun showers on the porch. Leela James is a terrific new artist to watch and listen to.

Phoebe Snow
Thursday, July 17, noon-2pm
Renowned for her elastic contralto and jazz-scat vocal gymnastics, singer Phoebe Snow was born Phoebe Laub in New York City. After signing to Leon Russell's Shelter label, Snow issued her self-titled debut LP in 1974; on the strength of her Top Five smash "Poetry Man," the album rose to number four on the Billboard charts. A tour with Paul Simon followed, and after returning to the studio, Snow emerged in 1976 with Second Childhood, another highly successful effort which, like its predecessor, was a gold-seller. This music legend appeared at Woodstock in 1994 with a gospel group additionally comprising Mavis Staples, CeCe Peniston, and Thelma Houston.

Alice Smith
Thursday, July 24, noon-2pm
Alice Smith has the voice of a soul singer: a four-octave range and remarkable control, versatility, and emotion. In spite--or because--of this, her songs hardly fall into the soul, or even neo-soul, category. Instead, they circle from rock to blues to pop to R&B to jazz, never settling fully into one before a new chord, a new phrase, or a new verse will change the feel completely. Her added introspection makes for much more than just a warm, thoughtful sound; it also gives it an element of timelessness. Her critically acclaimed and Grammy-nominated debut album For Lovers, Dreamers & Me is a remarkable debut from an impressive and talented Brooklyn musician.

Meshell Ndegeocello
Thursday, July 31, noon-2pm
The brilliant innovative funk/soul bassist/composer/bandleader Meshell Ndegeocello was one of the first female artists signed to Madonna's Maverick record label in the early 90s. In 1993, her debut album received three Grammy nominations. But it was a duet with John Mellencamp on a cover of Van Morrison's "Wild Night" a year later that brought the singer/bassist the most acclaim, as the song became one of the year's biggest hits. Today she is among the most respected musicians in the country. Her albums have broken musical barriers, crossing funk into jazz, blues, psychedelic rock, rap, and world music. Her most recent album on Decca Records The World Has Made Me the Man of My Dreams (2007) features guest appearances from Pat Metheny and Oumou Sangare.

Richie Havens with special guest Marcus Carl Franklin
Thursday, August 7, noon-2pm
Born in the Bedford-Stuyvesant section of Brooklyn, Richie Havens moved to Greenwich Village in 1961 in time to get in on the folk boom. Havens had a distinctive style as a folksinger with his guitar set to an opening tuning, he would strum it while barring chords with his thumb, using it essentially as percussion while singing rhythmically in a gruff voice for a mesmerizing effect. Havens' 1967 Verve release Mixed Bag is a classic. It wasn't until 1968 and the Something Else Again album, however, that Havens began to hit the charts--actually, Havens' fourth, third, and second albums charted that year, in that order.
Havens's career benefited enormously from his appearance opening the Woodstock festival in 1969 and his subsequent featured role in the movie and album made from the concert in 1970. His first album after that exposure, Alarm Clock, made the Top 30 and produced a Top 20 single in "Here Comes the Sun." These recordings were Havens' commercial high-water mark, but by this time he had become an international touring success. Havens made a cameo appearance in the 2007 fictionalized biopic about Bob Dylan, I'm Not There, which featured a starring role by the teenage blues guitarist and actor Marcus Carl Franklin.

MetroTech Center is situated in the Civic Center / Borough Hall area of Downtown Brooklyn. The BAM Rhythm & Blues Festival at MetroTech concert stage is located on the lawn at MetroTech Commons.

By Car:
Public parking is available at One and Two MetroTech Center. The entrance to Parking Lot P is on Lawrence and Bridge Streets between Willoughby Street and the Myrtle Promenade or at The Gallery at MetroTech. The entrance to the Parking Lot is at the intersection of Flatbush, Willoughby, and Gold Streets.
Please call 718.636.4100 or visit www.bam.org for more information about the BAM Rhythm & Blues Festival at MetroTech.