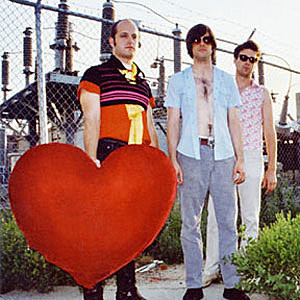 The not-for-profit on the corner of Kent Ave and Metropolitan claims to be "the only block in this section of Brooklyn that has not been rezoned for high-rise condominiums."

Psych-rockers Oneida, recently back from a tour in support of "Preteen Weaponry" (the first part in the "Thank Your Parents" triptych the band is releasing on Jagjaguwar/Brah), and also playing the free Seaport Music show this Friday, will be recording a new single for Social Registry during the show ("Limited to 35 tickets - first come first serve").

The East Village Radio Festival at South Street Festival is the same day. Full line-up of Monster Island events, and some tour dates, below: 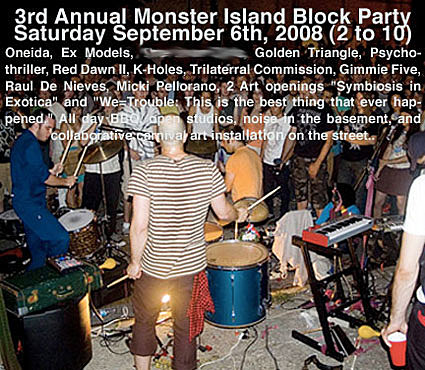 Steve Five will give a good honest truth about your appearance for $2.00

Bands from Todd P's practice spaces will be performing live in their studios...

In Live With Animals-"Symbiosis in Exotica" Vashti Windish and Cameron Michel have built a landscape filled with antediluvian archetypes and macabre imagery, casting a shadow between reality and the dream... and giving new meaning to the surreal.

In Secret Project Robot "We=Trouble:This is the Best Thing that ever Happened" an, original, print show developed by Shea la' Finch from Tiny Showcase in Providence, Rhode Island. Featuring the work of over 50 artists.