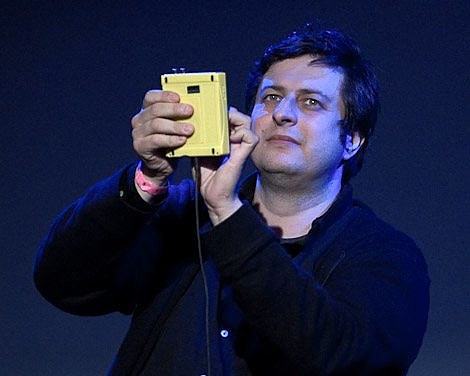 Dates have been announced dates for this year's Eugene Mirman Comedy Festival, which will take place September 17th - 20th at The Bell House in Brooklyn. Lineup and ticket info to come.

Aziz Ansari, now an even huger celebrity thanks to a co-starring role in the new NBC TV series Parks and Recreation, will be back in NYC soon and will be making at least two appearances while he's here. The first is at Eugene Mirman's weekly Tearing the Veil of Maya show at Union Hall on Sunday, May 3rd @ 7:30 pm (tickets at the door) (Eugene won't actually be there though). The next is one night later at UCB as part of Leo Allen's weekly, late-night Whiplash show. Tickets to the latter are free, and you probably want to make a reservation.

Aziz's other upcoming appearances include the Sasquatch Festival, Bonnaroo, and a TBA DVD taping in NYC in "early June".

Mirman is currently on tour with Flight of the Conchords (which is why he won't be at Union Hall on Sunday), though he didn't jump on till after the group's two NYC shows.

Mirman also recently toured with John Wesley Harding's Cabinet of Wonders. That show visited NYC three times: February 11th, March 11th, and April 15th (all three links have pics, one of which is reposted above). There remains a May 21st show hosted by Philly radio show World Cafe Live. Tickets for that show are on sale.

Speaking of John Wesley Harding (aka Wesley Stace), on Thursday, April 30th, he'll be performing at CUNY's Proshansky Auditorium on a bill titled "Collaborations/Elaborations: The Music of Daniel Felsenfeld." The event is part of the PEN World Voices Festival, and will feature Harding, Mark Z. Danielewski, Daniel Felsenfeld, Rick Moody, and others. Details on that below.

In addition to that show, Harding has his own UK tour coming up. He just did a reading/performance at the Union Square Barnes and Noble on April 27th.

Details on the PEN Festival show, with all upcoming Eugene Mirman dates and a video roundup of the comedian's recent activities, below...

Using the creepy, love-struck, sexual, and elegiac words of Kenneth Koch, Comte de Lautréamont, and Jonathan Lethem--and featuring readers and performers, Mark Z. Danielewski, Rick Moody, and Wesley Stace--American composer Daniel Felsenfeld musically hones in on moments of personal, artistic, and social change. With an ensemble of New York's most accomplished singers and instrumentalists, this will be a powerful and surprising night of musical exploration.

Eugene Mirman's The Will to Whatevs Tip #44: Surviving High School