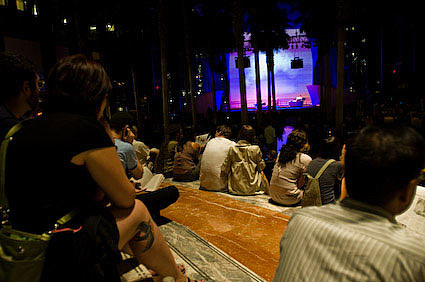 The next free show at NYC's World Financial Center will be "Songs of Love & Despair: A Musical Tribute to Pablo Neruda" on Wednesday, April 15th. The event, "curated and produced by David Spelman, known worldwide for his biannual New York Guitar Festival," will include Clogs, Irene & Vojtech Havel, Colin Stetson, Pedro Soler with Benat Achiary, Bob Holman, Laurie Anderson & Cecilia Vicuna. The last show for Clogs (the instrumental band w/ members of The National) was at BAM on February 26th.

The Pablo Neruda tribute will take place in WFC's Winter Garden (220 Vesey St) -- the same spot as the annual Bang on a Can Marathon which is scheduled this year for Sunday, May 31st. Tortoise will be performing at that event.

If you haven't been to the venue (where all shows are free), "The World Financial Center is a complex of buildings across West Street from the World Trade Center site in Lower Manhattan in New York City, overlooking the Hudson River. This complex is home to offices of major corporations including Merrill Lynch and American Express as well as Dow Jones and its Wall Street Journal division among others. The entire complex is owned by Brookfield Properties, except for the space occupied by American Express."

Also performing there this summer will be Anthony Gonzalez from M83 on Tuesday, July 14th.

Mountains, who we wrote about in February, play the venue on Tuesday, July 7th with Scanner.

More WFC dates with descriptions, below...

Songs of Love & Despair: A Musical Tribute to Pablo Neruda
Wednesday, April 15
WFC Winter Garden
Regarded as one of the greatest and most influential poets of the 20th century, Chilean poet and Nobel laureate Pablo Neruda was a master of styles, ranging from erotically charged verses and historical epics to political manifestos and surrealist poems. In honor of National Poetry Month, an international roster of distinctive musicians and artists, including Clogs, Pedro Soler with Beñat Achiary, Laurie Anderson, Irene & Vojtech Havel, Colin Stetson and others, gathers to celebrate Neruda's work through music, spoken-word and song.

Hector del Curto and Eternal Tango Orchestra
Thursday, May 14
WFC Winter Garden
Tonight, Hector Del Curto and Eternal Tango Orchestra transform the Winter Garden into a grand dancing ballroom. Praised for his extraordinary skill, the Argentinean bandoneónist and bandleader has captivated audiences around the globe by reviving the "orquesta tipica" tradition. The dance party is energized by a lesson with instructor Jennifer Wesnousky and DJ sets by NYC tango luminary Richard Lipkin.