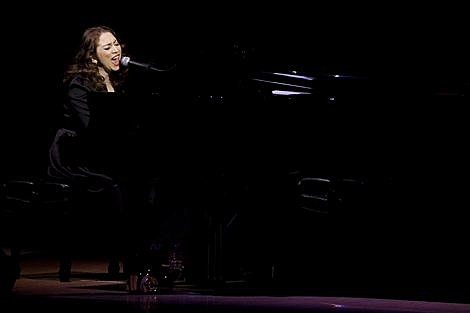 The New Yorker Festival is back (Oct 1-3), and will feature a variety of events including a premiere of The Social Network to Werner Herzog to Pee Wee Herman to the dude from Beetlejuice who yells at his kids, and everything in between. So far the musical interview lineup includes Regina Spektor, Yo Yo Ma, Justin Timberlake (promoting "The Social Network") and James Taylor. Sometimes those include short performances, though no performances have been announced so far. Tickets go on sale 9/10 at noon, and all festival details are below...

During the weekend of October 1st through October 3rd, The New Yorker will present its eleventh annual Festival, a three-day celebration that will once again bring together a distinguished group of writers, thinkers, artists, and other luminaries from fields including film, music, politics, economics, architecture, fashion, and literature. Since the Festival's inception, events have sold out quickly, drawing close to twenty thousand people from around the world every year. The full program guide will be included in the September 13, 2010, issue of the magazine, on newsstands September 6th, and will be available at newyorker.com/festival.

Among this year's highlights:

o New Yorker writers David Grann, Jane Mayer, Susan Orlean, Jeffrey Toobin, and Calvin Trillin will gather for an evening of stories about life at the magazine, presented in conjunction with the Moth performance series and hosted by Andy Borowitz.

o A panel, Live from New York, will feature Seth Meyers, the head writer for "Saturday Night Live," and other cast members, to be announced; the event will be moderated by David Remnick.

o In a series of New Yorker Talks, Ken Auletta will investigate the impact that Google and the Internet have had on the media (and everyone else); Atul Gawande will discuss end-of-life care; Malcolm Gladwell will look at the magical year of 1975; Paul Goldberger will explain why architecture matters; Alex Ross will explore the bass lines of music history; and James Surowiecki will analyze talent and context in a random world.

o An opening-night screening of David Fincher's film "The Social Network," about the founding of Facebook, will be followed by a discussion with the film's stars, Jesse Eisenberg and Justin Timberlake, and the screenwriter Aaron Sorkin.

o The Tea Party, a panel featuring Dick Armey, the chairman of FreedomWorks; Jill Lepore, a contributing writer at The New Yorker; Rick Santelli, the on-air editor at CNBC; and Anthony Weiner, the New York congressman, will explore the rise of the right. The event will be moderated by David Remnick.

o About Town excursions will include breakfast and a tugboat ride with the vice-president of McAllister Towing Buckley McAllister, the tugboat owner and operator George Matteson, and Burkhard Bilger; a tour of Philip Johnson's Glass House, followed by brunch and a discussion with Paul Goldberger; a tour of Platon's studio, followed by drinks and conversation with Elisabeth Biondi; Peter Schjeldahl's third annual tour of the Frick Collection, before public hours begin; and a tasting walk from Greenwich Village to Chinatown with Calvin Trillin.

o The Fashion Forward panel will feature designers of "the new guard": Maria Cornejo, Naeem Khan, Phillip Lim, and David Neville and Marcus Wainwright. The event will be moderated by Judith Thurman.

o A live version of The New Yorker's Cartoon Caption Contest will feature judges and cartoonists Matthew Diffee, Carolita Johnson, and Barbara Smaller; the event will be hosted by Robert Mankoff.

o A panel on gay marriage will feature David Boies and others, to be announced; the event will be moderated by Jeffrey Toobin.

o The Vampire Revival, a panel moderated by Joan Acocella, will feature Noël Carroll, Distinguished Professor of Philosophy at the CUNY Graduate Center; the writer Stephen King; Matt Reeves, the writer and director of the upcoming film "Let Me In"; and Melissa Rosenberg, the screenwriter for all three films in the "Twilight" saga, as well as the upcoming fourth.

o Lawrence Wright will perform his new one-man show, "The Human Scale." The show is based on Wright's New Yorker article, "Captives" about the crisis in Gaza. This will be the first performance of a four-week run.

o After a sneak-preview screening of "Sympathy for Delicious," which won the U.S. Dramatic Special Jury Prize at the 2010 Sundance Film Festival, Rebecca Mead will talk with the film's creative team and co-stars, Mark Ruffalo and Christopher Thornton.

o A panel, Natural Disasters, moderated by David Grann, will feature Susan Hough, a seismologist with the Southern California Earthquake Center; Charles Mandeville, a volcanologist, geochemist and senior research scientist in the American Museum of Natural History's Department of Earth and Planetary Sciences; Joshua Wurman, an atmospheric scientist who studies tornadoes and hurricanes; and Don Yeomans, the manager of the Near-Earth Object Program at NASA.

o Verses /An Afternoon of Poetry will feature New Yorker contributors John Ashbery, Anne Carson, Cynthia Cruz, Jorie Graham, and Tracy K. Smith, who will read from their work; the event will be hosted by Paul Muldoon.

Tickets will go on sale on Friday, September 10th, at 12 noon E.T., and may be purchased at newyorker.com/festival or by calling 800-440-6974. Ten per cent of tickets to all events will be available at the SVA Theatre, 333 West 23rd Street (between Eighth and Ninth Avenues). These tickets will be sold on Friday, October 1st, from 12 noon to 4 P.M. A limited number of tickets will be sold at the door to each event one hour before start time, with the exception of Morning at the Frick, Come Hungry, Inside the Artist's Studio, A Visit to the Glass House, The Cartoon Caption Game, and Tugboat Manhattan.