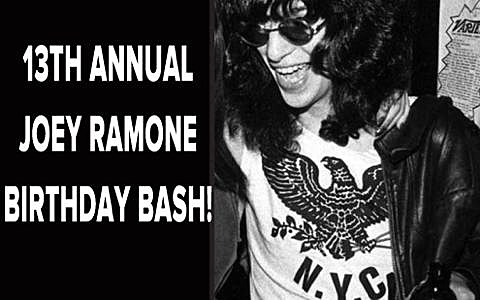 Joey Ramone, who died from lymphoma in 2001, would've been 62 this year. Here's details on his annual birthday bash:

Following the tradition, this year's BASH will take place on Sunday, May 19th, the actual date of RAMONES' birthday. The evening will be hosted at the Bowery Electric, to allow for a more intimate "up-close-and-personal" setting. The venue is located on the Bowery and Joey Ramone Place, just one block from the location of the original CBGBs.

Making his first appearance at the BASH is this year's headliner CJ Ramone, who was bassist and sometimes singer in The Ramones. CJ joined the group in 1989, replacing original member Dee Dee Ramone, and remained with the group until they retired in 1996. In past years, other Ramones members Tommy Ramone and Richie Ramone have performed at the BASH.

Also performing at the 2013 BIRTHDAY BASH is Andy Shernoff, a founding member of original New York punk band The Dictators, a member of The Resistance with JOEY RAMONE, and a guest musicians on JOEY's posthumously released debut solo album, "Don't Worry About Me." Sharing the bill are The Independents (a group JOEY managed), Sic F*cks, Ingrid and the Defectors, The Bullys, Heap, CJ Ramone, and Andy Shernoff. As in years past, the spectacular party will conclude with a performance by The Joey Ramone Birthday Bashers featuring Mickey Leigh, Walt Stack, CJ Ramone, Jahn Xavier, Walter Lure, George Tabb, Emily Brout, Pat Carpenter, Danny Nez, and surprise guests. The Masters of Ceremony will be John Holmstrom and Pete Aschner. Carrying on the 13 year tradition, Sean O'Sullivan's Punk Pipers will close the show. Additional surprises are anticipated at the evening's events, as yet to be announced.

Tickets to the 13th annual Joey Ramone Birthday Bash are on sale now.