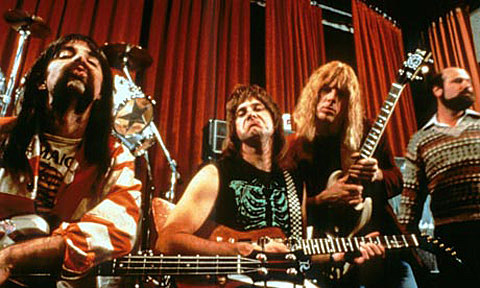 This year's New York Film Festival is shaping up to be the biggest ever. The festival scored not one but three major coups in the programming department, snagging premieres of perhaps the three most-anticipated films of the fall and winter season: David Fincher's Gone Girl, Alejandro Gonzalez Innaritu's Birdman, and Paul Thomas Anderson's Inherent Vice. With these extremely well-pedigreed films, NYFF has vaulted itself to the top of the North American fall festival heap above the likes of Telluride and Toronto. It also features Cannes favorite Foxcatcher, Life of Riley, the final film by the late Alain Resnais, and Mike Leigh's biopic of the English painter J.M.W. Turner Mr. Turner, among many other exciting titles. The festival runs from September 26 - October 12, and Tickets will go on sale to the general public on September 7 at noon (if you're a Film Society of Lincoln Center member, you probably already know that tickets are already available).

There are a number of cool music-related films screening during the festival, perhaps the most exciting of which is a 30th anniversary screening of arguably the greatest rock 'n' roll movie ever made, Rob Reiner's This is Spinal Tap with Christopher Guest, Nigel Tufnel himself, in attendance. The fest will also feature Damian Chazelle's New York set drumming drama Whiplash, which got rave reviews out of Sundance, and features Miles Teller doing all his own jazz drumming and JK Simmons as a drill-sergeant of a drum teacher. In addition, Mia Hansen-Love (who's married to Olivier Assayas, who also has a film at the fest) will be showing her new film Eden, which chronicles the French electronic music scene in the 90s and will premiere at Toronto earlier in September.

This is all in addition to the other cool film stuff coming up, like the James Brown series at Lincoln Center and this week's BV-presented City Gardens documentary.

You can check out the full NYFF main slate lineup below.

Birdman or The Unexpected Virtue of Ignorance
ALEJANDRO G. IÑÁRRITU | 2014 | 119 MINS
Closing Night
One-time action hero Riggan Thomson (a jaw-dropping Michael Keaton) stages his own adaptation of Raymond Carver's What We Talk About When We Talk About Love while contending with a scene-hogging narcissist, a vulnerable actress, and an unhinged girlfriend for co-stars; a resentful daughter; a manager who's about to come undone... and his ego, the inner demon of the superhero that made him famous, Birdman.

'71
YANN DEMANGE | 2014 | 99 MINS
A riveting thriller set in the mean streets of Belfast over the course of 24 hours, '71 brings the grim reality of the Troubles to vivid, shocking life as a squaddie (Jack O'Connell) finds himself trapped and unarmed in hostile territory and the lines between friend and foe become increasingly blurred.

Eden
MIA HANSEN-LØVE | 2014 | 131 MINS
U.S. Premiere
Mia Hansen-Løve's fourth feature is based on the experiences of her brother (and co-writer) Sven--one of the pioneering DJs of the French rave scene in the early 1990s--and plays in the mind as a swirl of beautiful faces and bodies, impulsive movements, rushes of cascading light and color, and music, music, and more music.

Foxcatcher
BENNETT MILLER | 2014 | 133 MINS
A vivid portrait of a side of American life in the '80s that has never been touched in movies, Bennett Miller's meticulously crafted new film deals with the tragic story of the the fatally dissociated billionaire John E. Du pont (Steve Carell) and the brothers and championship wrestlers (played by Mark Ruffalo and Channing Tatum) recruited by Du pont to create a national wrestling team on his family's sprawling property in Pennsylvania.

Goodbye to Language
JEAN-LUC GODARD | 2014 | 70 MINS
Jean-Luc Godard's 43rd feature, shot in 3-D and "starring" his beloved dog Roxy, is a work of the greatest freedom and joy, as impossible to summarize as a poem by Wallace Stevens or a Messiaen quartet.

Heaven Knows What
JOSH & BENNY SAFDIE | 2014 | 94 MINS
U.S. Premiere
Harley is madly in love with Ilya. She's sure he loves her just as much, if only he could express it. Both of them are heroin addicts, kids who wander around New York trying to scare up money for a fix. The Safdie Brothers' toughest movie, it's not romantic but it will break your heart.

Hill of Freedom
HONG SANG-SOO | 2014 | 66 MINS
U.S. Premiere
Kwon is given a packet of undated letters from Mori, who has come to Seoul to propose to her. As she walks down a flight of stairs, they are dropped and scattered. While reading them, she must make sense of the chronology... and so do we, in Hong Sang-soo's daring new film, made up of a series of disordered scenes based on the letters.

Horse Money
PEDRO COSTA | 2014 | 103 MINS
U.S. Premiere
Pedro Costa's astonishing new film, which "takes place" in the soul-space of Costa regular Ventura, is a self-reckoning, a moving memorialization of lives in danger of being forgotten, and a great and piercingly beautiful work of cinema.

Jauja
LISANDRO ALONSO | 2014 | 108 MINS
U.S. Premiere
A work of tremendous beauty and a source of continual surprise, Alonso's first period piece stars Viggo Mortensen as a Danish military engineer who traverses a visually stunning variety of Patagonian shrub, rock, grass, and desert on horseback and on foot in search of his teenage daughter.

Misunderstood
ASIA ARGENTO | 2014 | 103 MINS
North American Premiere
As preteen Aria shuttles between the well-appointed homes of her divorced showbiz parents, her large affectionate cat her only companion, she elaborates her walks into sometimes life-threatening adventures. Blurring the line between imagination and actuality, Asia Argento's irrepressible projection of young female subjectivity is ingenious, direct, and utterly real.

Mr. Turner
MIKE LEIGH | 2014 | 149 MINS
A portrait of the magnificent painter J.M.W. Turner and his time, but also an extremely clear-eyed film about art and its creation, and the great human problem of sharing a life with other people. Featuring a remarkable performance from director Mike Leigh's great collaborator, Timothy Spall.

Pasolini
ABEL FERRARA | 2014 | 87 MINS
U.S. Premiere
Abel Ferrara's new film compresses the many contradictory aspects of his subject's life and work into a distilled, prismatic portrait, with a brilliant Willem Dafoe in the title role.

The Princess of France
MATÍAS PIÑEIRO | 2014 | 70 MINS
U.S. Premiere
Matías Piñeiro's dazzling fifth feature, which follows a group of young people involved in a radio production of Love's Labour's Lost, doesn't transplant Shakespeare to the present day so much as summon the spirit of his polymorphous comedies.

La Sapienza
EUGÈNE GREEN | 2014 | 100 MINS
U.S. Premiere
In Eugène Green's exquisite new film, an unhappy married couple travel to Italy so the husband can research the Baroque architect Francesco Borromini. There they encounter a brother and sister, whose friendship helps to restore their own sense of inner balance.

Tales of the Grim Sleeper
NICK BROOMFIELD | 2014 | 105 MINS
Four years after the arrest of the Grim Sleeper serial killer in South Central Los Angeles, filmmaker Nick Broomfield interviews friends, neighbors, and community activists to unravel the chilling story, while giving voice to his victims and finding the racial divide that still exists there.

Timbuktu
ABDERRAHMANE SISSAKO | 2014 | 97 MINS
U.S. Premiere
A serenely composed vision of the humiliation and terror wrought by foreign Islamic jihadists who occupy the ancient Malian city of Timbuktu. A film that is by turns wondrous and terrifying.

Time Out of Mind
OREN MOVERMAN | 2014 | 117 MINS
U.S. Premiere
As George, a man evicted from his apartment and forced onto the streets, Richard Gere may be the "star" of Oren Moverman's haunting new film, but he allows the world around him to take center stage, and himself to simply be.

Two Days, One Night
JEAN-PIERRE & LUC DARDENNE | 2014 | 95 MINS
A factory worker on the verge of being laid off (Marion Cotillard) has 48 hours to convince her co-workers to forego their bonuses so that she might keep her job. At once an unforgettable drama and a tough ethical inquiry, from Jean-Pierre and Luc Dardenne.

Whiplash
DAMIEN CHAZELLE | 2014 | 106 MINS
A pedagogical thriller and an emotional S&M two-hander, Whiplash is brilliantly acted by Miles Teller as an eager jazz drummer at an unnamed New York music academy and J.K. Simmons as the teacher whose method of terrorizing his students is beyond questionable, even when it gets results.

The Wonders
ALICE ROHRWACHER | 2014 | 110 MINS
North American Premiere
Alice Rohrwacher's sophomore feature, a vivid yet mysterious story of teenage yearning and confusion, conjures a richly concrete world that is subject to the magical thinking of adolescence.