The Queen of Rap, slayin' with Queen Bey 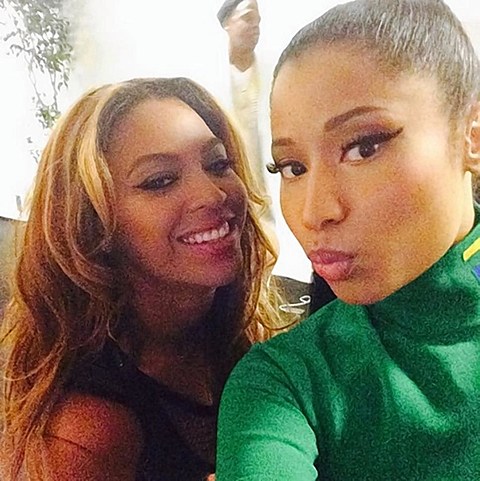 Look, I don't have the polling data handy, but I'm willing to bet that over the past 12 months, there has been a noticeable increase in the amount of young women who call themselves feminists, and that this is almost entirely due to Beyoncé. And no, contrary to popular belief, this was not because of some viral-era voodoo that took place when everybody reblogged that image of Beyoncé standing in front of the word FEMINIST at the VMAs; it was because of her ingenious idea to include in the original version of "***Flawless" a clear, concise, and marvelously demystifying definition of that too-often-misunderstood word. Thanks to Beyoncé, somewhere in America, a seventh-grader is right now being asked what the word feminist means, and instead of saying "an angry woman who hates men," she is answering in a memorized intonation of Chimamanda Ngozi Adichie's words: "a person who believes in the social, political, and economic equality of the sexes."

The above quote is from Lindsay Zoladz's review of Beyoncé: Platinum Edition over at her new-ish pop-music column for Vulture. As it points out, feminism has seen a huge rise in post-Beyoncé American culture, and this has especially happened in pop music. Other articles on this have been published throughout the year, like Lindsay's 2014: The Year That All-Female Collaborations Ruled the Radio for the same Vulture column, or Molly Beauchemin's FKA twigs, Lorde, and the New Feminist (Dance) Movement for Pitchfork, but now that the year is coming to a close it seems like everyone is getting in thinkpiece mode declaring 2014: The Year of Feminist Pop. Here are some good reads:

Rachel Brodsky for SPIN: Feminism in 2014: More Than a Trend

Lindsay Zoladz for Slate: A Salute to the Bad Feminists of Pop

Kelley Dunlap for Buzzfeed: 17 Of The Most Feminist Songs Of 2014

And not unrelated: Molly Beauchemin's piece for Pitchfork, 2014: The Year We Reached Peak Ass

Also Madonna releasing a song called "Bitch I'm Madonna" featuring Nicki Minaj is kind of a feminist thinkpiece on its own, isn't it?