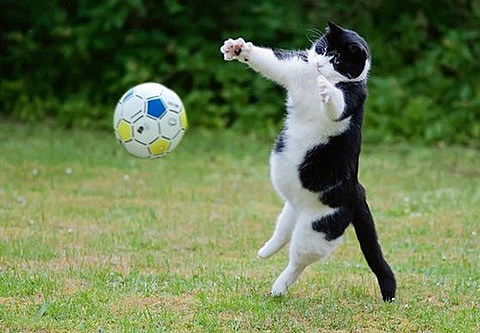 The 2014 FIFA World Cup starts this week in Brazil and will take over the entire planet's consciousness -- and even some of America -- for the next month (June 12 - July 13). It may still elicit shrugs in much of the US, but it's pretty much unavoidable in New York, and even folks like myself who watch almost zero sports find themselves wrapped up in it. Pretty much every bar in NYC with a television is showing it. Bars that don't have TVs are getting them. Even music venues are getting in on the game. Terminal 5 is showing games on its rooftop deck, and you can also watch at Brooklyn Bowl, Baby's All Right, The Rock Shop, Knitting Factory, and SOB's. Probably more, like we said, its everywhere.

The action starts Thursday (6/12) with the opening ceremony (2:15 PM EDT) followed at 4 PM by the opening game, Brazil Vs. Croatia. At the ceremonies, Pitbull, Jennifer Lopez & Claudia Leitte will perform this year's Official Theme Song, "We Are One (Ole Ola)." You can listen to the original, and watch the video for a remix below. There's an entire official World Cup album, titled One Love, One Rhythm, that features Santana with Wyclef Jean & Avicii, Ricky Martin, Shakira, The Isley Brothers, Brazilian music legend Sergio Mendes, Bebel Gilberto and, um, The Baha Men. You can stream it at Rdio if you like. Need more football music? Spotify's got an official page.

Individual countries have World Cut themes too. England has had some interesting ones in the past: New Order did the official England theme in 1990, "World in Motion," with dodgy guest rapping from the England team; and in 1998 there was "(How Does It Feel to Be) On Top of the World?" performed by a totally weird supergroup of The Spice Girls, Ian McCulloch (Echo & the Bunnymen), and britpop bands Ocean Colour Scene and Space. That same year, The Lightning Seeds also did a World Cup song, "Three Lions 98," that went to #1 (Spice Girls only went to #9). My favorite, though, will always be Air Miami's totally unofficial song, "World Cup Fever" from their 1995 album, Me Me Me. Those can all be streamed below.

Meanwhile, the sudden death of British comedian Rik Mayall has sent a song he made for the 2010 World Cup, "Noble England," into the UK Top 40. You can watch the video for that below.

There is, however, a not-so-fun side of all this, mainly coming from international governing body FIFA which runs the World Cup and is not the most upstanding non-profit in the world. (Its president, Sepp Blatter, is not the most liked man ever.) Last Week Tonight with John Oliver did an informative/hilarious 13-minute segment on this past week's episode which I highly recommend watching It does a great job of explaining what's great and what's awful about all of this. If you haven't seen it yet (it's already racked up 2.5 million views on YouTube), watch it below.