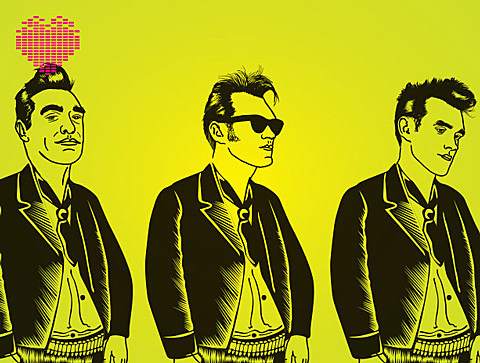 RadioLoveFest returns for a second year at BAM from May 5 - 10, reimagining some of your favorite radio programs as a live show. This year's highlights include science show Radiolab Live (5/5), "An Evening with Terry Gross" (5/6), "Don't Look Back: Stories from the Teenage Years" (5/6) which is hosted by Molly Ringwald, quiz show "Wait Wait...Don't Tell Me" (5/7) with contestants Mike Birbiglia, Jessi Klein, and Peter Grosz, and the music of The Smiths and Morrissey interpreted by Mexican musicians for a show called "Mexrrissey" (5/10).

There's also a film series (including The Man Who Fell to Earth, The Last Waltz and Naked Lunch), live music in the BAMcafé and more. Tickets are on sale now for BAM members and will go on sale to the general public on March 16. Full RadioLoveFest 2015 schedule is below.

Radiolab is WNYC's innovative, Peabody Award-winning cult sensation about wonder, discovery, and big ideas. Co-hosted by veteran science reporter Robert Krulwich and MacArthur "Genius" Jad Abumrad, the show tackles topics as diverse as why Kenyans win marathons, what is time, and why left-handedness persists. Airing weekly on more than 450 stations around the country, Radiolab also consistently ranks in the top five podcasts on iTunes.

Combine an intelligent interviewer with a roster of guests that, according to the Chicago Tribune, would be prized by any talk-show host, and you're bound to get an interesting conversation. Fresh Air's interviews, though, are in a category by themselves, distinguished by host and executive producer Terry Gross' unique approach. "A remarkable blend of empathy and warmth, genuine curiosity and sharp intelligence," the San Francisco Chronicle says. For Terry Gross' BAM debut the tables will be turned as a very special guest (to be announced at a later date) interviews one of the most iconic interviewers on the cultural landscape.

Since its launch in 1997, The Moth has presented more than ten thousand stories, told live and without notes, to standing-room-only crowds worldwide. The Moth podcast is downloaded nearly 25 million times a year, and the Peabody Award-winning The Moth Radio Hour airs weekly on radio stations nationwide. Since 1996, Radio Diaries has been telling the extraordinary stories of ordinary life by giving people tape recorders and working with them to report on their own lives and histories, with the results broadcast on NPR's All Things Considered, This American Life, BBC, and on The Radio Diaries Podcast. For RadioLoveFest, The Moth and Radio Diaries present "Don't Look Back: Stories from the Teenage Years" which will focus on the exquisite anguish of the adolescent experience. Actor and author Molly Ringwald will host the event; guests include actor and Rookie founder Tavi Gevinson, Sierra Leonean writer Ishmael Beah, author of A Long Way Gone: Memoirs of a Boy Soldier, and others to be announced.

Wait Wait...Don't Tell Me! ® is NPR's weekly hour-long news quiz program hosted by Peter Sagal. Along with human scoreboard Bill Kurtis, Sagal will challenge panelists Mike Birbiglia, Jessi Klein, and Peter Grosz--as well as the BAM audience--to distinguish what's real news and what's made up. Sagal's varied career extends beyond Wait Wait...Don't Tell Me!®, which he began hosting in 1998. He's also pursued projects as a playwright, screenwriter, stage director, actor, extra in a Michael
Jackson video, travel writer, essayist, ghostwriter, and staff writer for a motorcycle magazine, and was recently named by Newsweek as one of their top picks to host The Oscars. The Wait Wait...Don't Tell Me!® show recorded at BAM will air the following Saturday on WNYC at 11am and on public radio stations across the country that weekend.

The Longest Shortest Time, WNYC's judgment-free parenting podcast, provides a safe forum for parents to share stories and find support. Host and creator Hillary Frank knows firsthand how hard it can be to make friends when you're a busy mom. Frank brings her wildly successful matchmaking for moms event to RadioLoveFest, giving New York moms a chance to connect and meet future friends.The event is for adults only and for mothers of children of all ages. A free drink is included in
the ticket price.

NPR's hit storytelling show Snap Judgment comes to the BAM stage with a show on the theme of transitions. Host Glynn Washington will spotlight raw, intimate, and musical performances from some of the world's finest storytellers--including the return of monologist Mike Daisey.

Death, Sex & Money is a show about the big questions and hard choices that are often left out of polite conversation. Host Anna Sale--dubbed "the Queen of the Awkward Pause" by Fast Company--talks to people about relationships, money, family and work. At the Harvey, the show will explore the realities of life and marriage with two couples: comedian W. Kamau Bell and Melissa Hudson Bell, Ph.D, and fashion tastemaker Simon Doonan and home décor guru Jonathan Adler. Luscious Jackson will bring the beats as Death, Sex & Money's house band for the night.

Every week on Bullseye host Jesse Thorn cuts through the weeds of pop culture with irreverent comedy, in-depth interviews, and a keen eye for what's worth knowing about. For one night only, the comedy portion of that lineup takes center stage as Thorn hosts an A-list roster of female comics live on the BAM Opera House Stage.

"Nothing the world holds could match the love waiting for me in Mexico City" --Morrissey WNYC's John Schaefer hosts an evening of songs by Morrissey - both from his solo career and his years with The Smiths - arranged and played by some of Mexico's finest musicians, including Camilo Lara's hit electronic music project Mexican Institute of Sound. Morrissey has mentioned Mexico in several songs, and the love affair goes both ways. Perhaps this is because several generations of Mexicans, facing economic challenges, connect with the way Morrissey's songs reflect the depression of Manchester during the 1980s. Whatever the reason, Morrissey's songs of love, loss, and longing have found a huge audience south of the border. Featuring arrangements by Sergio Mendoza
(Orkesta Mendoza/Calexico), this all-star band sounds like a brass- and accordion-led combo from the smallest village with the biggest bleeding heart.

Jonathan Schwartz is the host of "The Jonathan Channel," WNYC's 24/7 online music stream devoted to the Great American Songbook. The channel provides an unparalleled showcase for this timeless music, presented by its strongest advocate, Schwartz, in his intimate, insightful, and utterly original approach that combines impeccable taste with countless personal tales, colorful anecdotes, and encyclopedic knowledge. Listeners can tune in anytime to hear the sounds of Sinatra, Nelson Riddle, Ella Fitzgerald, Tony Bennett, Mel Torme, Bing Crosby, Billie Holiday, as well as the next generation of American standards performers, including Diana Krall, Michael Bublé, Michael Feinstein, Jane Monheit, and Nancy LaMott, among many others. Jonathan also hosts two radio shows on WNYC highlighting the American Songbook, on Saturday evening and Sunday afternoon on 93.9 FM. This afternoon event celebrates the life and music of an American giant of popular song, Richard
Rodgers. Schwartz will host the event in his uniquely personal and spontaneous way, featuring performances and conversation with with music director Tedd Firth and performers Cyrille Aimée, Karrin Allyson, and Freddy Cole.

Leonard Lopate--WNYC radio host, avowed foodie, and repatriated Brooklynite (after 30 years in the Manhattan wilderness)--hosts an afternoon of conversation, cooking demonstrations, and tastings
with the founders of three of the brands that have put Brooklyn on the culinary map: Scott Bridi of Brooklyn Cured, Angela & John Fout of Sohha Savory Yoghurt, and Brooklyn Brewery President Steve Hindy.

WQXR's weeknight host Terrance McKnight is also the host of the Saturday evening program All Ears with Terrance McKnight, a show about musical discovery, which was honored with an ASCAP Deems Taylor Radio Broadcast Award in 2010. He brings that spirit of curiosity to his role as the emcee of the "Battle of the Boroughs"--The Jerome L. Greene Performance Space at WNYC and WQXR's annual competition to find New York City's best undiscovered musical talent. As part of the RadioLoveFest, McKnight curates two nights of music for BAMcafé, featuring WNYC "Battle of the Boroughs" winners Royal KhaoZ and 5J Barrow.

On the Media's Brooke Gladstone, an avowed Star Trek fan, returns for another RadioLoveFest with this irresistibly goofball satire. When a beleaguered alien race mistakes a group of washed-up TV space-opera actors (Allen, Weaver, and Rickman) for real life astronauts, they whisk away the trio of has-beens on a galactic adventure. The one-liners come nonstop in this send-up of Star Trek and its nerd fan culture, which has gained a cult following of its own. Tony Shalhoub and Sam Rockwell lend
scene-stealing support.

Movies on the Radio and Spinning On Air host David Garland will host both a screening and conversation with three-time Academy Award-winning film composer Howard Shore, who wrote the music--featuring jazz saxophonist Ornette Coleman--for this brilliant mind-melter. A writer and cockroach exterminator (Weller) gets hooked on his own insecticide, accidentally kills his wife, and winds up in the frighteningly surreal Interzone, where typewriters transform into giant talking bugs and shadowy agents peddle a drug called The Black Meat. William S. Burroughs' bizarro Beat novel finds its perfect interpreter in David Cronenberg, who brings it to the screen with all its weirdness and melancholy fully intact. Cronenberg and Shore have collaborated on nearly all of the director's films.

Soundcheck host John Schaefer joins philosopher Simon Critchley (author of the recently published book Bowie) for a conversation about the film that made David Bowie a screen icon. A human-like alien (played by alien-like human Bowie) crash lands on Earth to retrieve water for his planet, but instead discovers pain, loneliness, and the sick soul of American society. Nicolas Roeg's science fiction mind-bender is a provocative parable about diseased capitalism in a television-obsessed culture told in a swirl of hallucinatory imagery.

Arun Venugopal presents an early-career triumph by one of his favorite filmmakers, Italian cinema legend Federico Fellini. This bittersweet buddy film follows five aimless young men dreaming, scheming, and chasing girls in a small seaside village. Featuring music by Nino Rota, this semiautobiographical character study is full of Fellini's robust humor and poetic touches, all cloaked in a poignant haze of nostalgia. "It's my favorite Fellini film, possibly his most personal effort and by far his funniest." --Andrew Sarris