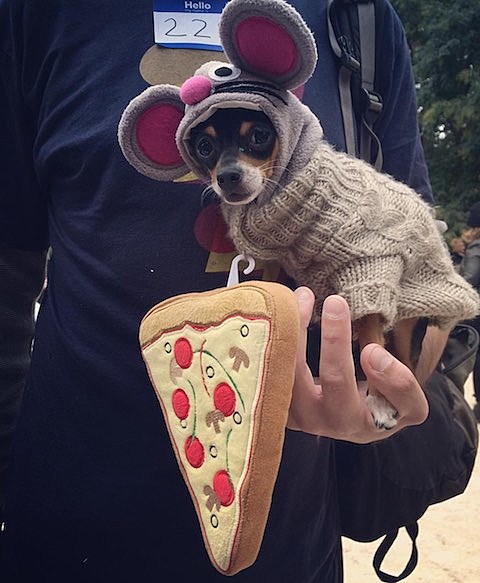 As you surely know, Halloween is Saturday (though judging from the amount of people dressed up last weekend, some people may have been confused) and there is no shortage of spooky things to do. The extravaganza that is NYC's annual Village Halloween Parade happens on Saturday on 6th Avenue from just North of Spring Street to 16th Street and lasts from 7 PM - 10:30 PM. This year's theme is "Shine a Light" and you can be in it.

There are also loads of shows to go see on Halloween, including Flipper (with David Yow) at House of Vans, Wax Idols at Saint Vitus, Fred & Toody at Union Pool, The Orwells with just-added Twin Peaks and Shark? at Music Hall of Williamsburg, Joanna Gruesome, Aye Nako and more at Shea Stadium, Skrillex on the Pier of Fear (aka Pier 94), Murphy's Law at Bowery Electric, Ringo Starr at Kings Theatre, the big show at MSG with Grateful Dead members Bob Weir, Mickey Hart and Bill Kreutzmann with John Mayer and more (or the other Dead member Phil Lesh just outside of NYC)... and many other show options.

Speaking of Toubin, his annual "Monster Mash" and "Haunted Hop" parties happens this year on Saturday at Secret Project Robot and features a host of current NYC bands covering classic NYC bands. Details still to be revealed but it's $10 with costume and $20 without and flyer is below. Also below: Toubin's 2015 Halloween mix.

Other shows: World Inferno Friendship Society will play their annual Hollowmass party at Warsaw on Halloween. These shows are spectacles, often involving elaborate set-pieces, fire-breathing, marching bands and more. Karla Rose and the Thorns, and Vic Thrill also play and tickets are on sale.

DFA Records are throwing a Halloween Party at Palisades on Saturday with Container, Guerilla Toss, Ciarra Black, Pill, Malory, PC Worship, Larry Gus, and Show Me The Body. Tickets are on sale now. And Wolf + Lamb, Mike Simonetti, and Paul Raffaele will be spinning at Bed Stuy's Sugarhill Disco Club on Saturday (tickets).

Cameo Gallery, which closes in less than a month, is throwing a "Cameoween" party on Saturday night featuring a live performance by Le1f, DJ sets from Neon Indian and Ssion and karaoke hosted by Samantha Urbani. This is a FREE party and starts at midnight.

Halloween is also the time for cover shows, where bands play as another, usually more famous band. At Alphaville on Friday (10/30) you can catch Dances as T.Rex, Jangula as David Bowie, Heliotropes as Tom Petty and the Heartbreakers, Piers as Fleetwood Mac, and Stringer (mems of Heeney) as The Smiths. That show is $8 at the door. Also on Friday at Union Pool, Motion Studies will perform as Hall & Oates with Fielded (apparently just being themselves as Kate Bush) also on the bill. That's a free show.

For something more emo on Friday, Washed Up Emo and Bye Week Productions are presenting cover sets of Saves the Day (Stay What You Are in full), The Get Up Kids, Weezer and Guided by Voices at Bar Matchless (10/30). We don't know who all the performers are, but the STD and TGUK sets feature members of Field Mouse (advance tix sold out, but some will be available at doors).

Over at Silent Barn on Saturday they'll have Delicate Steve (as Smashing Pumpkins), Celestial Shore (as The Ramones), Very Fresh (as Alanis Morrissette), and Dear Leader doing something they're calling "TRL 1999 w/ Carson Daly." Tickets are on sale and day-of it's $10 at the door with costume or $12 without.

And at Baby's All Right on Halloween you can see "the world's drunkest tribute to Guns 'N Roses," Mr. Brownstone playing a midnight show (tickets).

For those who want another chance to dress up their pooches like Pizza Rat or Bagel Pigeon or whatever, there's "Pawfest" at Riis Park Beach Bazaar on Saturday afternoon. It starts at noon, is free, and will also feature live performances from The Supertones, The Shipwrecks and The Flesh. Flyer for that is below.

And if you don't mind traveling outside the city just a bit on Halloween, there's Screaming Females as X at Asbury Park's Convention Hell with members of Bouncing Souls and The Parlor Mob covering Hall & Oates, and more; Cypress Hill play The Stony Pony; The Darkness play The Paramount in Huntington, NY; and Sufjan Stevens will be in Jersey City. And that aforementioned Phil Lesh show at The Cap. 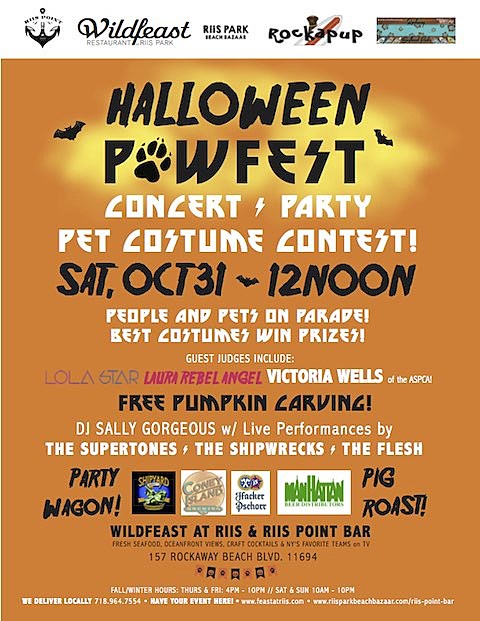 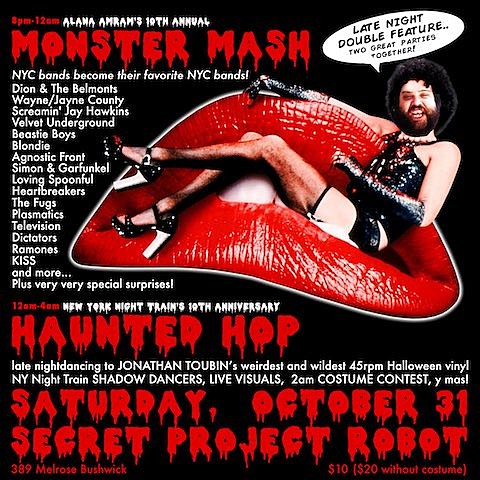