As mid-to-late October rolls around, many spooky NYC Halloween-related events are set to take place. Some already have, like Into the Veil at Green-Wood Cemetery, S U R V I V E performance included, and the annual Zombie Crawl which was set loose Sunday, October 15 in the East Village. Pictures from that are in the gallery above.

As always, the biggest event of the season is the 44th-annual Village Halloween Parade, which takes place on October 31 from 7:00 PM - 11:00 PM. This year's theme is "Cabinet of Curiosities: An Imaginary Menagerie." Anyone can march in the parade but in order to participate, you must be in costume, and arrive at 6th Ave at Canal St. beginning at 6:30 PM. If you can't watch the parade in person, it will be broadcast live on NY1 from 8 PM – 9:30 PM.

Another annual, much-loved parade, the Tompkins Square Halloween Dog Parade, will take place on Saturday, October 21 from noon - 3PM. The event is free, with a suggested donation of $5, and is rain or shine. Runway competition begins at noon, as many canine companions will be competing for "thousands of dollars in prizes." UPDATE: Check out pictures of lots of costumed canines from the parade.

For even more costume-clad dogs, the 19th annual Great PUPkin Dog Costume Contest happens on Saturday, October 28 at 11:30 AM. Preregistration has sold out, and day of registration starts at 10:30 AM - there are only 60 slots, so don't be late! Ten winners will receive a PUPkin rosette and prizes donated by local businesses.

Tompkins Square Park will also be hosting a Time Warp Zine-sponsored "City of the Dead" event on Saturday, October 28, from 1 - 6 PM, which features Scott Skitzo with Skitzopolis, The Bowery Boys, Straight To Hell: A Clash Tribute, and Avant Duel ("Featuring the legendary VON LMO"). Then on Sunday (10/29, 1 - 6 PM) there is a "Halloween Surprise", which is set to include "tricks, treats and other details to be announced soon."

Of course, live music options are bountiful. Soundtrack composer Fabio Frizzi, who worked closely with Italian horror master Lucio Fulci, will be playing two nights at Music Hall of Williamsburg on October 29 & 30. On Sunday, 10/29 he'll be performing a live score to a screening of 1980's classic The Beyond; and on Monday, 10/30 he'll perform a tribute to Fulci, including live suites from the director's seminal works such as Zombi 2, Seven Notes In Black, The Beyond, etc. with imagery from the films. Additionally, there will be a limited edition 45 single featuring Frizzi's classic themes sold exclusively at both shows. Tickets are on sale.

At Good Room on 10/28 it's the "Firehouse + Fixed Halloween" with Kim Ann Foxman and JDH & Dave P spinning in the main room and Occupy the Disco spinning in the Bad Room. The party doubles as The Good Room's third birthday and tickets are on sale. For more dancing, Fatboy Slim's "Warehouse of Horrors" party also happens on 10/28 at a secret Williamsburg warehouse location with Detlef, Clozee, Maximono, The Golden Pony, Jubilee, Dirty Looks, Dischetto, Scott Matthews, Max August, and more TBA (tickets).

Cypress Hill do their annual Haunted Hill show this year at Brooklyn Steel on October 30 (tickets).

As for Halloween proper, PopGun's much-anticipated new multi-room Bushwick venue Elsewhere has its Grand Opening on Halloween night, and even though they haven't released the lineup yet, just having your first look at the very cool space is reason enough to consider it a good option. UPDATE: The lineup has been announced, and includes Battles and friends, Cakes Da Killa, Combo Chimbita, Future Punx, and Alex Pasternak (DJ) Tickets are on sale, and you can enter to win a pair.

There are a few shows on Halloween where the music matches perfectly with the night: GWAR play Irving Plaza with Doyle from Misfits. (tickets); World/Inferno Friendship Society hold their 20th annual Hollowmas concert extravaganza at Warsaw on 10/31 (tickets); Goth chanteuse and powerhouse wailer Diamanda Galas will be playing two shows at Murmurr Theatre on 10/29 and 10/31 (tickets); and over at Brooklyn Bazaar on Halloween, superior new industrialists Uniform play with Pawns, Extended Hell, Sub Space, and SPIC, with proceeds going to help hurricane recovery efforts in Puerto Rico (tickets, flyer below).

UPDATE: The day before the GWAR show, there will be a live interview and "short stripped down performance" with members Pustulus Maximus, The Beserker Blóthar & Jizmak da Gusha at Brooklyn Bazaar (10/30) (tickets).

You can also catch "slasherwave" band GosT at Saint Vitus on 10/31 with Dance With The Dead, and Hogwasche (tickets). Stream GosT's 2016 LP Non Paradisi:

Jonathan Toubin's annual "Haunted Hop" happens Halloween night at Knockdown Center, featuring Shannon & the Clams, Kid Congo & the Pink Monkey Birds, Ian Svenonius' Escape-Ism, Paint Fumes, and The Nude Party. There's also a separate room with cover bands featuring: Wyldlife as The Dead Boys; Roya as The Gun Club; The Nude Party as The Seeds; Fiona Silver as Wanda Jackson; Saylavees as The B-52s; Chorizo as Wire; Toni Lynn, Leah Beth, and the gang as Girlschool; The Othermen as The New York Dolls; Matt Marando and The Davies as The Kinks; and the Danny Goldshtein Trio as "Bloody Holly." Plus: a hall of mirrors, rare monster movies, 16mm wall-to-wall live visuals, "late night horror cuisine," art installations, specialty rooms, and more. Tickets are still available and flyer and set times are below.

NYC psychobilly icons The Cramps will once again be paid tribute to at the Halloween edition of the "Sally Can't Dance" at Bowery Electric on Thursday, October 26 featuring Bob Bert (Sonic Youth, Pussy Galore), Mick Collins (Dirtbombs, Gories), Peter Zaremba (The Fleshtones), Eric Davidson (New Bomb Turks), Palmyra Delran (The Friggs), and many many more. Howie Pyro and Miss Guy are DJing and tickets are on sale.

A different sort of tribute is happening at Bluebird Brooklyn on 10/27: "Halloween is David Lynch Night" featuring Bowie/Lynch cover band The Agent Jefferies (perfect name!), plus A Place both Wonderful and Strange performing "The Laura Palmer Deviations," contortionist Amazing Amy as the Limber Log Lady, and a chevron-decorated Frank Photo Booth for selfies. $5 at the door.

Speaking of cover band shows, there are always a few around Halloween with bands performing as other bands. At Gold Sounds on 10/28 you can catch Field Trip as The Killers, Tabemono as Gorillaz, Pom Pom Squad as The Smiths, and Strange Loops as Talking Heads. Over at The Glove on 10/28 you can see Stringer as Pavement, Yucky Duster as ABBA, gobbinjr as Justin Timberlake, and Estro Zombies as Misfits. Tickets for both of those are available at the door. In the basement of Brooklyn Bazaar on 10/26, a benefit for Puerto Rico and Mexico will serve up La Misma as The Misfits, members of l.o.t.i.o.n., Scalple, Terrorist, and Nosferatu as Charged GBH, Scalple as Jerry's Kids, members of Conspiracy, Subversive Rite, and Daddy Long Legs as X, and members of Subspace as PiL/Sex Pistols. (tickets)

The McKittrick Hotel, which is home to the already spooky Sleep No More, will host "Inferno: A Halloween Masquerade" on October 27, 28 & 31: "You are cordially invited to The McKittrick Masquerade: Inferno at The McKittrick Hotel with live performances and an open bar all night long. Guests are encouraged to come dressed in attire inspired by the occult, be it a witch, sorcerer, enchanter, vampire, mummy, beast, or monster. Alternatively dress inspired by the occult all in black." Tickets, including options with Sleep No More, are on sale.

After the Village Halloween Parade, you can head to the official afterparty, which this year moves from its previous home at Webster Hall to Le Poisson Rouge. "The Halloween House of Horror" has a one hour vodka open bar from 8PM-9PM, DJ RM, and a $500 cash prize for the best costume couple of the night (tickets).

If you're in the mood to watch any Halloween-themed horror films, there are no shortage of movie options around the city this month, many as part of the NYC Parks Department’s “Shocktober Fest” series, which includes free screenings of Poltergeist at Brooklyn's Sunset Park on 10/27, and The Rocky Horror Picture Show at McCarren Park Pool on 10/28 (which features a costume contest and trivia). Also,. (The Caligari event was canceled.) There's also lots going on at Alamo Drafthouse, Nitehawk Williamsburg, Videology, Syndicated  and more.

Although it isn't officially open until next winter, the new Park Slope location of Nitehawk Cinema will be throwing a party on Halloween, which includes giveaways, arts and crafts, and related activities. A Haunted Hawks' Night Out runs from 3 PM-7 PM and Frank Einstein series author Jon Scieszka will be on hand to do a reading. 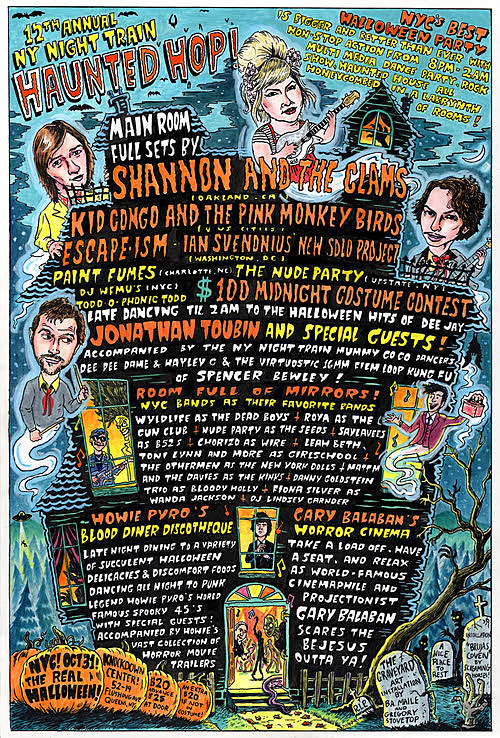 8:30pm Danny Goldshtein Trio as Bloody Holly
9pm Matt Marando and The Davies as The Kinks
9:30pm THE OTHERMEN as The New York Dolls
10pm Toni Lynn, Leah Beth, and the gang as Girlschool
10:30pm Chorizo as Wire
11pm Saylavees as The B-52s
11:30pm Fiona Silver as Wanda Jackson
12am The Nude Party as The Seeds
12:30am Roya as The Gun Club
1am WYLDLIFE as The Dead Boys
DJs Lindsey Gardner and Elena Childers