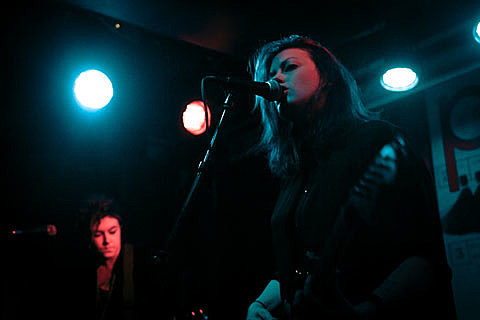 London duo 2:54 have signed to Fat Possum in the US, who will give their Scarlet EP an American release next week. The EP was produced by Rob Ellis, who has also done production work for PJ Harvey. It features the previously posted tracks "Scarlet" and "Got A Hold," in addition to two others. You can stream the entire EP at SPIN and download it at the Fat Possum webstore.

Fat Possum will also release their new single, "You're Early," b/w a remix of the song by Wild Beasts. "You're Early" is a bit cleaner than the material on the Scarlet EP and reminds me more of Garbage than the Melvins (who 2:54 is named after). Either way, it's still a nicely dark sounding cut and you can stream it below.

The band have a few US dates this month leading up to SXSW where they'll play the official BrooklynVegan SXSW showcase along with Screaming Females, Titus Andronicus, Caged Animals, The Young, and one more TBA. Before they get to Austin for SXSW, they'll be in NYC for two shows happening on March 11 at Glasslands (tickets) and March 12 at Mercury Lounge (tickets). Both of those shows are with fellow UK duo Big Deal who will also play a SXSW Wednesday BrooklynVegan party, but at 'Hotel Vegan'.