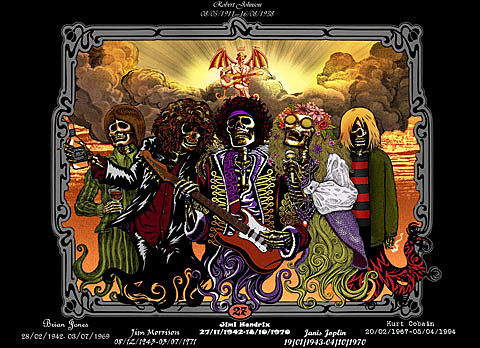 "The 27 Club, also occasionally known as the Forever 27 Club or Club 27, is a name for a group of influential rock music artists who died at the age of 27. The 27s: The Greatest Myth of Rock & Roll details the history of the phenomenon. The impetus for the club's creation were the deaths of Brian Jones, Jim Hendrix, Janis Joplin and Jim Morrison. Kurt Cobain, who died in 1994, was later added by some. With the exception of Joplin, there is controversy surrounding their deaths. According to the book Heavier Than Heaven, when Cobain died, his sister claimed that as a kid he would talk about how he wanted to join the 27 Club. On the fifteenth anniversary of Kurt Cobain's death, National Public Radio's Robert Smith said, "The deaths of these rock stars at the age of 27 really changed the way we look at rock music." [Wikipedia]

Jean-Michel Basquiat, Dave Alexander of the Stooges, Pete de Freitas of Echo & the Bunnymen, Sean Patrick McCabe of Ink & Dagger, Kristen Pfaff of Hole, Mia Zapata, D. Boon of the Minutemen, and other notable musicians have also passed away at 27.