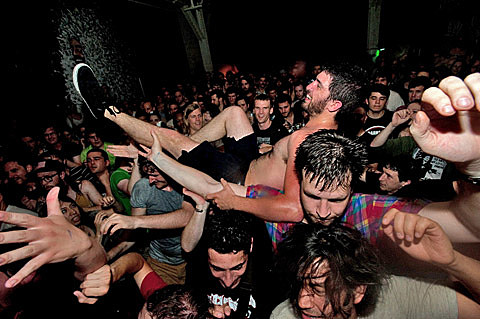 You may have noticed that following last night's Maria Minerva show (12/19) at Brooklyn's 285 Kent, there are no more upcoming shows scheduled at the venue. (The only other one would have been the Don Giovanni showcase, which has since been taken off-sale.) We've heard the rumor, but 285 Kent representatives have not officially confirmed that the Williamsburg DIY venue is closing. Todd P did say though, that despite a claim by Gothamist, "last night was not the last show ever at 285." One of the venue's reps, Ric Leichtung, also tweeted "Beyond tonight, we have not announced any other events at 285 Kent, though there may be others in the future."

If the venue does close for good, it'd be a sad loss for the Brooklyn music scene. It's been home to many great local shows, some especially exciting surprises like the one where A$AP Rocky and Grimes showed up, the Trash Talk show where Odd Future showed up, and just a number of wild shows by everyone from Fucked Up to Thee Oh Sees (who also unfortunately are going on hiatus).