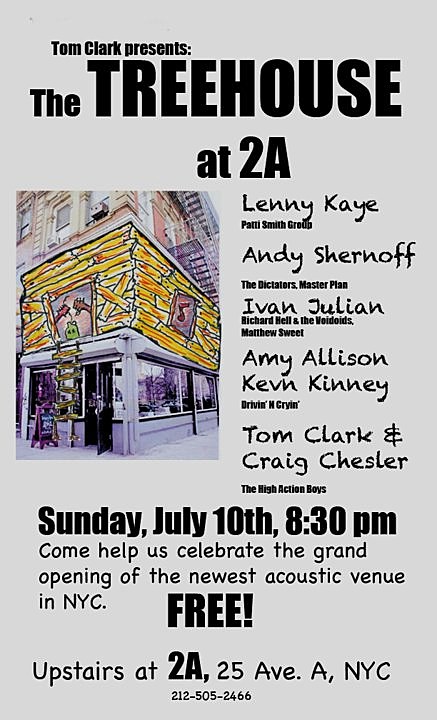 It's here. I'm presenting The Treehouse at 2A for the first time this Sunday. The newest 'acoustic' venue in New York, right on Avenue A. I say 'acoustic' in parenthesis because, well, if Chuck Berry walked in, I don't think i could really say "Sorry, Chuck, Old Bean, you can't plug that thing in!" I'm excited to have a new space for musicians to perform, and to be part of it. When it came time to plan the first night, I knew I should probably get a 'ringer' or two kick the night off with a bang. I did not, however, expect EVERY person I asked to say 'yes'!!! WHAT a night it's turned out to be! Here's what is lined up!
Andy Shernoff- The fuse to the bomb that is the Dictators. The man behind The Master Plan. Andy is one prolific cat who writes of love, lust, White Castle Hamburgers, teenage angst and the rapture. His new acoustic shows are fantastic! Honored to have him on the bill for this special night!
Ivan Julian- half of the duo (with the great Robert Quine) that formed the twin guitar assault in the legendary Richard Hell and the Voidoids, then on to play with the likes of Matthew Sweet, The Clash, Shriekback and many others, Ivan is also one of the sweetest guys to survive the music biz. A genius behind the mixing desk, and a guy who can pretty much take apart and fix anything, Ivan is also fixing, i mean 'producing' the new High Action Boys record!
Kevn Kinney- I don't even know where to begin. Kevn Kinney was to me an oasis in the middle of the muck and mire of modern music. The man behind the wheel in Drivin N Cryin', Kevn Kinney literally got me interested in music again. His record "The Flower and the Knife" (produced by Allman Bro/Gov't Mule guitar slinger Warren Haynes!) was a wake up call for me. I went on to buy every record (there's 16, i believe!) the man has made. We cover one of KK's songs on our new record. We love him. There should be a statue to Kevn Kinney in every American town. Sigh.
Amy Allison- anyone who knows me knows i love this girls songs and her voice, and well, I love Amy Allison! I've converted many people into lifetime Amy devotees. High Action Boy Craig Chesler covered one of Amy's songs on his newest record. Elvis Costello is such a fan he sang a duet with Amy on one of her last records! Wow!! Sure, i'm pretty sure she's tired of hearing how she's "Mose Allisons daughter", but you know what? I play her records more than i play her old man's! Dig her!
Lenny Kaye-......i mean...duh......what do I even have to say about Lenny Kaye???? Legendary writer, historian, grammy nominated producer and musician, inductee to the rock and roll hall of fame, rock icon. And the nicest guy on the planet. From being THE founding member with Patti to form the Patti Smith Group, one of the most important groups to ever come out of NYC, to producing Suzanne Vega, Soul Asylum, (ahem) The High Action Boys and countless others, Lenny is still touring the world, writing his ass off, collecting old LP's, comic books, toys, etc....and will not be satisfied til every corner of his basement is full. And he's my bestest pal.
Me and Little Craiggy Chesler....I met Craig when he was 13. Practiced in his parents basement in Dekalb, Illinois...did some gigs, had some fun. Then...didn't see him for over a decade. Flash forward, Manitoba's bar...i'm setting up my stuff and i'm down on the floor plugging stuff in and i hear "Tom??" I said, without looking up "I'll be right with ya"..."Tom Clark??" I looked up. Craig Chesler. WTF???? His brother Steven was living blocks away and didn't tell Craig I was playing....brought Craig to the gig as a surprise. He got up and sang...and guess what?? HIs voice had changed since he was a squeaky kid! wow! It wasn't long before he was in the band. Craig has two fantastic records out. Buy them!
The potential is huge for an all out, All-star jam Sunday. It is encouraged, as a matter of fact. You never know who might show up, if all this isn't enough!! See you there.....it's FREE!!!!!!!!!!!!!!!!!!! be on time, it's gonna fill up fast! 8:30 sharp!!!!