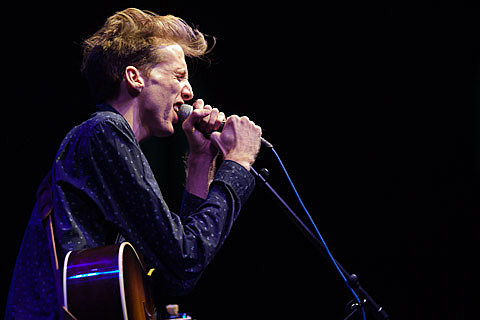 Bradford Cox released the latest effort under his Atlas Sound moniker, Parallax, on November 8 via 4AD. For someone who seemingly can't stop releasing songs, when Bradford puts out a proper full length, it always comes off as a cohesive piece of work and Parallax is his most focused album yet. It's got a similar overall feel to the dreamier direction Deerhunter took on 2010's excellent Halcyon Digest, but the material is so strong that it hardly sounds repetitive. The flow of the album subtly works in the slower, more ambient cuts to space out the relatively high amount (for an Atlas Sound record) of pop standouts. Like many pop experimentalists before him, Bradford has mastered the art of leaving his own weird touch on even the simplest tune. This comes across most strongly on "Mona Lisa," a re-recording of a track that appeared on his Bedroom Databank collection. The song is carried by the sort of upbeat acoustic guitar rock that Bowie experimented with on Hunky Dory, and Bradford sings with a fragile falsetto that brings to mind Lennon's "#9 Dream." You can stream the entire Parallax album on Spotify and purchase it at the 4AD webstore. You can also grab two MP3s from the album above.

As mentioned, Atlas Sound will be playing in NYC this winter, like he has been doing for the past few years. Earlier today, we mentioned the 12/17 Bell House show, which tickets are on sale for. It has since been announced that another show is happening on December 18 at Bowery Ballroom, which is good news for those who plan on attending our BV Holiday Party with Twin Sister, Widowspeak, and Ava Luna on 12/17 at Bowery Ballroom (tickets). Both Atlas Sound shows are with Balkans. Tickets for the Bowery Ballroom show go on sale Friday (11/25) at noon.