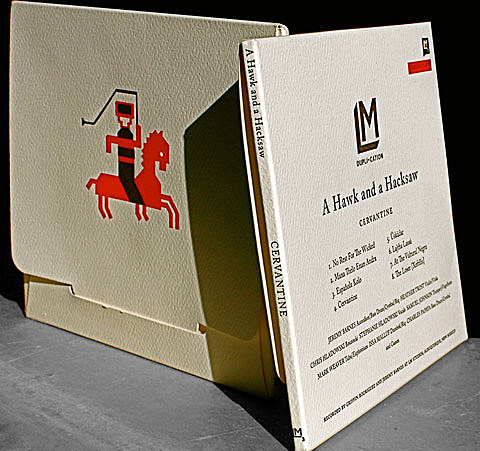 Not surprisingly (since they were down to less than 25, 5 hours ago), all 3-day passes to I'll Be Your Mirror USA, taking place in Asbury Park, NJ from Sept 30 - Oct 2, 2011, are sold out. All tickets to see the October 3rd Jeff Mangum show are gone too, so that means all the Mangum tickets are gone since only 3-day pass holders can get into Mangum's Friday show. If you want to see the rest of Friday, or Saturday (Portishead) or Sunday (Portishead), grab one-day passes on either SeeTickets or Ticketmater before those sell out too (let's see if they all disappear as fast as Coachella's did)

Jeff Mangum is not the only member of Neutral Milk Hotel playing the fest (though he may be the only one singing the band's songs). A Hawk & a Hacksaw (NMH's Jeremy Barnes) is also on the Friday lineup so far. A Hawk and a Hacksaw are releasing a new album, "Cervantine" (pictured above), via their own label L.M. DUPLI-CATION on February 18th. In March they'll tour the west coast before heading to Europe. All of their non-NJATP dates are below...

--
A HAWK AND A HACKSAW TOUR DATES