Hop Along at Saint Vitus in September (more by Vladislav Grach) 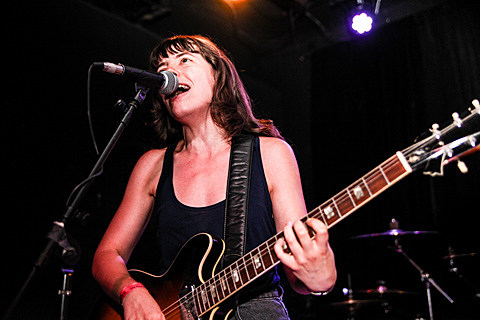 Sure, NYC has a lot of great shows almost every night of the week. But CMJ definitely stacks the deck (and the stages) a little more, with some overachieving bands playing upwards of 10 times over the next five days (10/15 - 10/19). With that in mind, here are 30 bands we think are worth catching during CMJ 2013. Clicking on the artist name takes you to their corresponding page on our NYC Show Calendar with a list of all of their upcoming NYC shows. We also made a Spotify playlist featuring songs from all the bands (who are on the streaming service).

Check out our full list and a stream of that Spotify playlist below...

Hop Along
Having made the transition from singer Frances Quinlan's fuzz folk solo project to a fully fledged live band (that even inspires some stage diving), Hop Along have become one of the most exciting upcoming bands in both indie circles and punk ones. They play their only CMJ week show at the BrooklynVegan party on Saturday (more details TBA soon!).

Pity Sex
Like post-rock, shoegaze is one of those genres that bands use as a reference point when they want to add more atmospheric elements to their sound. It's been showing up more and more in metal lately, but Pity Sex take the genre in a different direction, mixing it with emo. Any of the songs on their debut LP, Feast of Love, which came out earlier this year via Run for Cover, sound as great on a mixtape with The Pains of Being Pure at Heart as they do with Waxahatchee (too bad these guys weren't on indie pop prom!).

Speedy Ortiz
Speedy Ortiz might come off like indie rock traditionalists at first, but as their lyrics and super fun live shows show, they're more into sincerity than irony. They played a bunch of NYC shows earlier this year, but only one public date since the release of their fantastic debut, Major Arcana, so CMJ will be a much-needed and much-welcome return. They play a BrooklynVegan party on Friday (more details soon!).

Perfect Pussy
Perfect Pussy was formed from ex-members of under-appreciated Syracuse noise punks Shoppers and other Syracuse groups, and from the looks of things, they may have already exceeded their former bands in popularity. But popularity aside, this band simply rips and if it isn't clear from the sounds of their I Have Lost All Desire For Feeling EP, you gotta see it live.

Cloakroom
I guess Cloakroom couldn't decide if they wanted to make Mineral-esque emo or stoner sludge, because they've decided to combine them, and this one of those combinations that sounds as good in person as it does on paper.

Torres
Torres won us over at SXSW earlier this year with her grungy alt-folk and an excellent live band in tow, but if you weren't down in Austin for that music marathon, you can catch them at this one. One of their shows is a BrooklynVegan party Saturday (more details TBA soon!).

Schoolboy Q
Black Hippy rapper Schoolboy Q has been delaying his much-anticipated album for some time now, but he's released three terrific singles, and our fingers are still crossed that we'll hear the rest sooner than later. And maybe he'll use his CMJ appearance to preview some of it?

Deniro Farrar
One of the rappers to emerge out of the "cloud rap" craze, Deniro Farrar has had a steady flow of releases, and it's seeming like his best stuff is ahead of him.

Courtney Barnett
Australian singer/songwriter Courtney Barnett, who we recently profiled, has a real wit to her lyrics and hazy, but poppy, songwriting that recalls late '60s San Francisco Sound. This CMJ will be her first trip to North America, so get your bragging rights now. She plays a few shows including a BrooklynVegan party Saturday (more details TBA!).

Caravels
It's been quite the year for atmospheric post-hardcore, and Nevada's Caravels are no small part of why. They finally got their debut LP, Lacuna, out after a few years on their EPs/splits/7"s grind, and with its hum-along riffs and scream-along vocals, you won't know which to do.

The Jazz June
Speaking of, both of Caravels' CMJ shows are with influential emo veterans The Jazz June, who are reuniting (again) for this year's CMJ. The Jazz June made the kind of post-Sunny Day Real Estate emo that had more in common with indie rock than the alternative pop/rock that infiltrated the genre a few years later, and their influence especially resonates today. The chance to see this band in action again isn't one to pass up.

Palehound
Palehound (the project of Ellen Kempner) is local and has been playing a fair amount of NYC shows lately, but that doesn't mean CMJ isn't any less of a good opportunity to see her. She's got a new EP, Bent Nail, due out next week (10/22) via Exploding In Sound (former home of her friends Speedy Ortiz) and from the sound of it (stream the whole thing on Stereogum), it's equal parts acoustic folk and noise rock, and very promising.

Yamantaka // Sonic Titan
From the first time we heard them, it was clear Yamantaka // Sonic Titan care as much about their genre-crossing sound as they do about their image, and that's led to some pretty theatrical live shows. Fan of the music or not, this should be one of the more interesting bands to see this year. They play a few shows including a BrooklynVegan day party (more details soon!).

Ejecta
Ejecta formed recently, and only have three songs out at the moment, but the members are no strangers. It's the new duo of Leanne Macomber (who sings in Fight Bite and is a live member of a little band called Neon Indian) and Joel Ford (of Ford & Lopatin, and also a solo artist called Airbird), and they make big, bright '80s-inspired pop with the thumping synths of the current deep house movement. 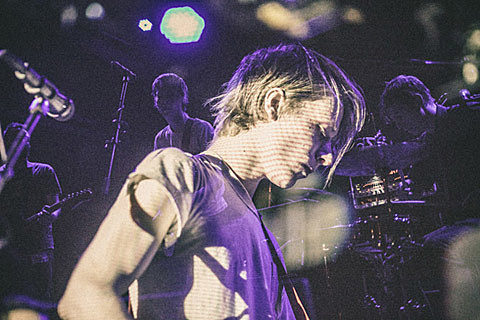 Dream Boys
This LA band make superior indiepop, with guitars that sparkle, chime and jangle and harmony-laden choruses. Fans of The Byrds, early Orange Juice, Felt and fellow Californians The Tyde should immediately dig into the band's self-titled debut album which was released last month via Art Fag.

Ex Hex
Mary Timony has an impressive indie rock CV, having fronted Autoclave and Helium in the '90s and is an integral part of supergroup Wild Flag. She just started a new band, Ex Hex, whose first taste of riffy rock is the terrific "Hot and Cold." You can hear more when Ex Hex play their sole CMJ appearance and first NYC show ever at the BrooklynVegan party on Saturday (more details TBA soon!).

Hookworms
Leeds, UK quintet Hookworms practice a visceral blend of noise, drone, motorik rhythms and impassioned vocals that basically demands to be listened to at top volume. Their debut album from earlier this year is got its North American release in September via Domino imprint Weird World, and their non-LP single, "Radio Tokyo," is a real stormer. These will be Hookworms' first American shows. They play a few times including at a BrooklynVegan party (more details TBA soon!).

Eagulls
Another group from Leeds (who use Hookworms studio, actually), Eagulls make sneering, immediate, shout-a-long post-punk. They're finishing up their debut album, due on Partisan next year, but recently released a ripper of a single, "Nerve Endings." CMJ will be their first shows in NYC and will include a BrooklynVegan party (more details TBA soon!).

Jacco Gardner
If you love the kind of harpsichord and Mellotron-soaked baroque psychedelia of the late '60s, Dutch youngster Jacco Gardner does an amazing job of recreating that sound on his new album, Cabinet of Curiosities. He and his ace band can do it live too.

Joanna Gruesome
Welsh band Joanna Gruesome released their debut album, Weird Sister, earlier this month via Slumberland. It's a terrific record of riotous indiepop that has both jangly melodicism and sharp-fanged, bash-it-out aggression. (It's almost like Los Campesinos! covering Veronica Falls or vise versa.) You've got a lot of chances to see them this week.

Mood Rings
Atlanta's Mood Rings have a sound that definitely stems from the '80s, be it soft-focus MOR pop, or shimmery Factory Records/4AD obscurities, but the group never quite lay their influences directly on the table. Their debut, VPI Harmony, is lush and ethereal and not without a good beat too, like on album standout "The Line" which is kind of like a guitar-oriented version of the Drive soundtrack.

Odonis Odonis
Just in time for Halloween! Toronto's Odonis Odonis growl out gritty, scratchy blast furnace rock and subterranean funk that would sound terrific at a decrepit mansion party in New Orleans, or somewhere else creepy. But a CMJ showcase (or unofficial party) will have to do this week.

Pat Jordache
It's been almost two years since Montreal band Pat Jordache last played CMJ and they've undergone a somewhat radical reinvention since then, into dark postpunk territory, though not your average influences, pulling from Jah Wobble style dub, scratchy funk and mid-'80s 4AD. You have two chances to see them.

Public Service Broadcasting
One of 2013's quirkier records is the debut album from UK group Public Service Broadcasting that take samples from old educational films and pair them with driving post-rock and krauty electronics. Their live shows are a cut-and-paste AV club extravaganza. As to what to expect from their sole CMJ show?  "Thrills. Spills. Excitement. Corduroy."

Shine 2009
Helsinki, Finland duo Shine 2009 skirt the line between indie pop and dance music, a tightrope act that Scandinavians seem particularly adept at. The late-'90s/early-00s seem to be of particular inspiration here, drawing from things like Kruder & Dorfmeister's K&D Sessions, jungle breakbeats, and effervescent, acoustic-y Swedish pop like The Embassy or Tough Alliance.

Tweens
Maybe not the greatest band name in the world, but it's hard to deny Cincinatti trio Tweens' appeal: garagey, nasally, punky pop that is equal parts raucous and infectious.

Yuck
Yuck don't seem to have been slowed down much by frontman Daniel Blumberg's departure, as they're still cranking out the catchy '90s style indie rock in the vein of Teenage Fanclub, Versus and Sebadoh, with a little MBV-style glide guitar dappled across at least a couple tracks. Their new album, Glow & Behold, is as heavy on the hits as it is the puns. They play a BrooklynVegan party too (more details TBA).