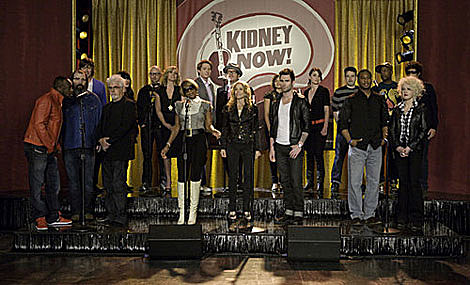 After meeting his biological father for the first time, GE powerhouse Jack Donaghy discovered his dad, professor Milton Greene, needed a kidney. Not being a potential organ donor himself, Mr. Donaghy turned to some very affluent friends in the entertainment world. This partnership created the phenomenon, "Kidney Now!' -- a benefit concert featuring some of the most recognizable names in the music industry. With the help of this song, Milton Green just might find the kidney match he needs and Jack Donaghy may be granted the gift of a father he never knew.

Video from last night's episode of 30 Rock below...