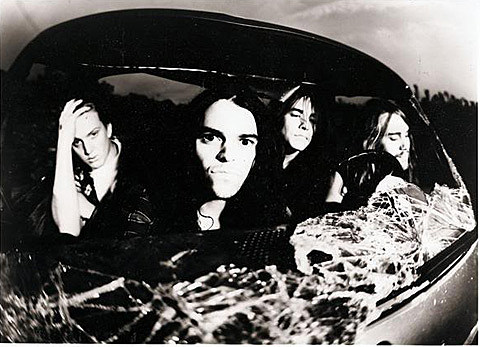 Is Kyuss ready for a reunion? The influential desert rock band which featured Josh Homme and Nick Oliveri in their pre-Queens of The Stone Age role is set to tour Europe as "Kyuss Lives". The 2011 incarnation will not feature Homme though, but will reunite vocalist John Garcia, bassist Nick Oliveri and drummer Brant Bjork. Guitarist Bruno Fevery, who recently played Kyuss songs with John Garcia on a tour called "Garcia Plays Kyuss", will play the Homme role. The "Garcia Plays Kyuss" tour hit both Hellfest and Roadburn. Both Oliveri and Bjork played with Garcia at the Hellfest gig. Josh meanwhile is keeping busy with his three current projects: Queens of the Stone Age, Them Crooked Vultures, and comedy.

Speaking of Roadburn, the 2011 version of the Holland festival will welcome the great Godflesh (!) who will perform Streetcleaner in its entirety and in order, including the Tiny Tears EP? The announcement comes on the heels of other recent (and notable) additions to the festival including Swans (who just added some new dates), Evoken (who are playing NYC on 11/13), Dragontears, Carlton Melton, Yakuza, Lonely Kamel, Ghost, Liturgy, Winterfylleth, Zoroaster, Naam, and many others. Godflesh reunited to play Hellfest this year.

All "Kyuss Lives" dates, the full Roadburn lineup and some videos are below...

Godflesh performing "Like Rats" live at the Guitar Alley in Metairie, Louisiana, on April 10, 1990

Godflesh
Performing Streetcleaner in its entirety, and in track order, including the Tiny Tears EP
Pentagram
Wovenhand
Soilent Green
Alcest