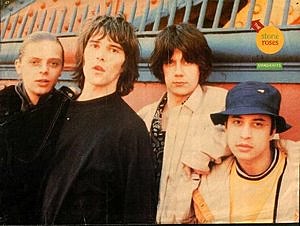 Ian Brown is the only obstacle to a Stone Roses reunion, the band's former bassist Mani said this week. And if the Manchester band are ever to get back together, it will be up to fans to twist Brown's arm.

"Me, John and Reni are up for doing it and Ian just needs some working on," Gary "Mani" Mounfield told the Channelbee website. Counting Mani, guitarist John Squire and drummer Alan "Reni" Wren, that's three-quarters of the band accounted for. But frontman Ian Brown is stone-hearted, and has hardly spoken to the others since their acrimonious split in 1996.

"Next year is the 20th anniversary of the first album," Mani continued. "It's the ideal time to do it. It's something I would love to do before we are all fat and bald. Start the campaign." [Guardian]

In the meantime we've got Blur, and The Specials.

Neil Young played the same venue last night, and the night before.