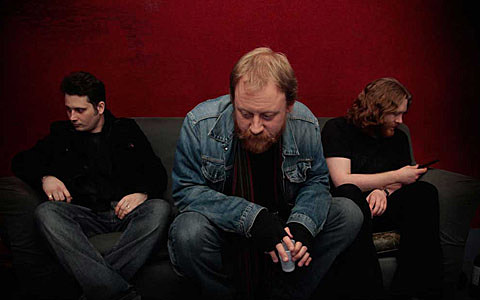 It would be hard to argue that Warning's 2006 release Watching from a Distance is anything less than a doom metal masterwork for the band. But everything great eventually comes to pass, and Warning called it quits again in 2009. Now Warning's Patrick Walker is back with his new band 40 Watt Sun. The UK band's stunning debut LP, The Inside Room, dropped earlier this year across the pond and has washed ashore courtesy of Metal Blade.

The Inside Room features more of a front-seat role for the voice of Patrick Walker, who's soaring and somber pipes bless these pensive burners. The band avoids doom metal in any traditional sense, using the genre as a jumping off point for a gorgeous slowcore hybrid that resembles a harder edged Red House Painters or Jesu. Listen to three (of the five) tracks from the LP below. They are"Carry Me Home", "Between Times" and "This Alone". Look for The Inside Room on July 19th, and preorder it now.

In addition, 40 Watt Sun are embarking on a rare US stint of Northeast/Midwest dates that will include a stop at Public Assembly on September 16th, a BrooklynVegan/Order of The Serpent production. Ticketing information is forthcoming, as is details on the support. Hopefully the band will also dip into their Warning catalog as well, much like they have done in previous dates (video of "Footprints" is below). In the meantime, head below for the full slate of tour dates along with all song streams.