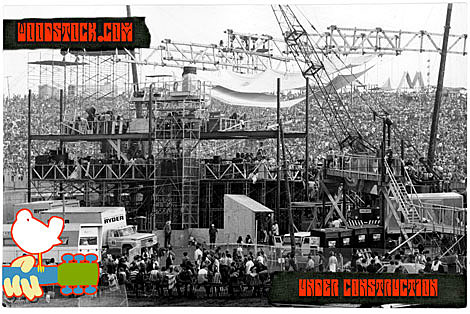 Chief Woodstock promoter Michael Lang is planning two free Woodstock concerts in Berlin, Germany and in New York in celebration of the 40th anniversary of the original 1969 festival. According to the press release, the New York show still doesn't have a venue, but will take place on the actual 40th anniversary of August 15th and 16th. The Berlin show will take place at the now-closed Tempelhof Airport on August 22nd and August 23rd.

Lang and his partners are hoping to snag some of the original participants that performed at Yasgur's Farm back in '69, including Santana, the Who, Joan Baez, Joe Cocker, Grateful Dead, Country Joe and the Fish, as well as current top acts. [The Rock Radio] (via)

An older, more optimistic email I got on the subject said that the shows will "include most of the original Woodstock Festival performers" ("most" is more than "some").

Shilpa Ray performed at Santos Party House last night. The event was being taped for a "documentary about the upcoming 40th Anniversary of Woodstock."

According to The Woodstock Preservation Archives...

Lot's of things happening for 2009. Of course, the release of our 'book' is highest on the list LOL. Other events include great memoires from Michael Lang and Artie Kornfeld, the re-release of the Woodstock documentary on blue ray, Ang Lee's movie "Taking Woodstock" recollecting the life of Elliott Tiber in theaters in the summer, and the 'semi-official' -- but not confirmed -- announcement of 2 free Woodstock anniversary concerts in Berlin and New York [see above].

Woodstock remembered, in the videos below...

Filed Under: Woodstock
Categories: Music News
Comments
Leave A Comment
Back To Top