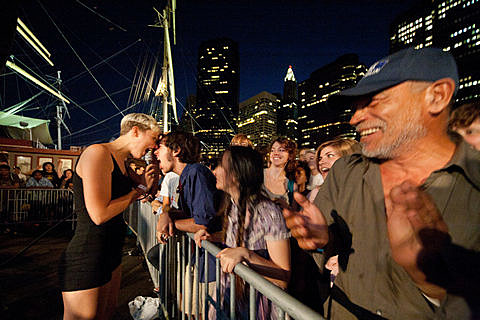 Running between every borough of New York City and culminating near the South Street Seaport, the East River runs at a speed of 4 knots. The Seaport and Pier 17 have a rich and diverse history as profound to New York City as Wall Street, Central Park or even Times Square. Historically, the lower portion of the East River has been one of the busiest and most important channels in the world. Beginning this summer, there will be a new reason for people to flock to the area, ironically which was once also known as the banks of the Sound River.

For ten successful years, The Village Voice has produced the Siren Music Festival at Coney Island. Taking a new spin on the sounds of the summer, The Village Voice will launch the inaugural 4Knots Music Festival on Saturday July 16th at the South Street Seaport. The festival will be free, open to all ages, and held rain or shine. Bud Light is the title sponsor for the festival.

"We're extremely excited about the launch of the 4Knots Music Festival this summer," commented Village Voice publisher Josh Fromson. "Music fans from all five boroughs and all over the world have circled the date of our summer music event on their calendars each year. We feel this new festival will not just live up to the glory of our past events, but sets the stage for continued success in the future."

The 4Knots Music Festival will feature renowned and emerging artists from today's music scene performing live all day in front of what is sure to be an extremely large and enthusiastic audience. A full lineup of the day's events will be announced in coming weeks.

The neighborhood where 4Knots Music Festival will be held offers attractions, shops and restaurants for every taste. It is easily accessible by subway, car, ferry or bus.

The full lineup will be announced "in the coming weeks."

We also have the lineups of the free Friday night Seaport Music Series shows at the Seaport to still look forward to, and there might be another Mad Decent Block Party at the location this summer.