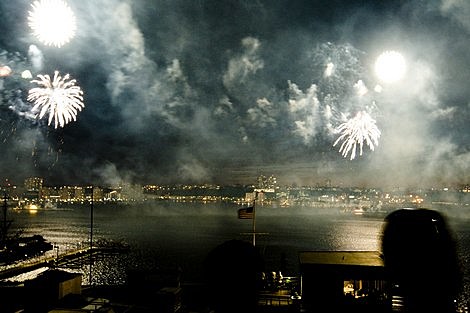 The 35th Annual Macy's 4th of July Fireworks returns to the West Side to delight New Yorkers and the nation with an awe-inspiring display of patriotic firepower. This year's extravaganza, "Gift of Freedom," will feature more than 40,000 fireworks expertly synchronized to a dynamic 25-minute score that includes a mix of American standards and the hottest pop favorites!

Not in New York? Check out our entertainment
special on NBC, July 4th at 9 pm EST.

"The Fireworks can be viewed from any area with an unobstructed view of the sky above the Hudson River. For the best views, head to 12th Avenue below 59th Street at the following access points along 11th Avenue." Note that: The Westside Highway will be closed from 22nd Street to 59th Street beginning at 4:00 pm. You can also watch from NJ. I wouldn't recommend trying to see them from Brooklyn, though it may be possible if you get up high enough somewhere. One option for watching the fireworks is aboard a Rocks Off ship.

Unfortunately there will NOT be a free concert in Battery Park this year, not that last year's was anything special (for people over 5 years old anyway). There will not be a free show on Governors Island this year either. Last year they had a free She & Him show and a Rosanne Cash show too. This year the beach on Governors will be occupied by a not-free Pacha-presented dance party (part of the four-day Dance.Here.Now. Festival).

July 4th is a Monday though, and it's a Monday you probably have off of work (like Bowery Presents does -- all their clubs are closed that day). That means you can stay up late Sunday, July 3rd which is when Panda Bear plays Music Hall of Williamsburg, Tinsel Teeth are at Death By Audio, The Hairs play a free afternoon show at the South Street Seaport Fulton Market, Jaga Jazzist play Le Poisson Rouge, and the Feelies play their third of three Maxwell's shows.