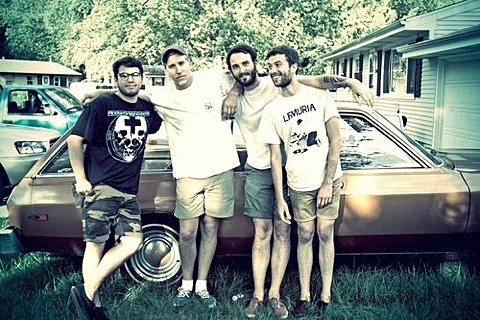 Last year, Placeholder released the I Don't Need Forgiveness LP, followed by a split 7" with Such Gold. This coming week, they'll bring their ongoing tour to Austin for SXSW where one of their shows is the official BrooklynVegan showcase on Wednesday night. Meanwhile, we cornered the band and asked them 5 QUESTIONS:

PH: Not really used to playing in venues, and the nature of DIY shows usually means spots we play in November don't exist by March. If I had to decide, I'd pick Asbury Lanes in Asbury Park, NJ. You can bowl and eat awesome food, and play to a pretty cool community.

This past fall we played with Crime in Stereo in Connecticut. The show was cool but, I'm an idiot and bought a new guitar less than an hour before we played. It was a flying v so, I looked pretty cool but, holy shit did it sound like hell. I don't know that I played anything right that night. Haven't played guitar live since. Traumatizing.