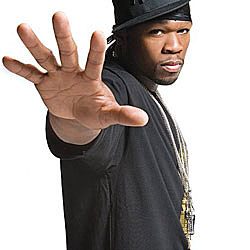 Earlier this week 50 Cent called off his Aug. 30 performance at the "40 Day" aka "Family Day" event in Queens, N.Y., after community members and law enforcement officials voiced fear over a possible shootout.

However, a new, more peace-inspired rumor has surfaced on the street: If 50 had, in fact, taken the stage at the G-Unit-helmed neighborhood party, he hoped to have Cam'ron join him. This seemed like an unlikely move from 50 Cent's camp considering the war of words that the G-Unit and Dipset members exchanged a few years ago. But before this story had time to gather too many legs, Killa Cam confirmed to MTV in a video interview that he had no plans of making the trip to Queens, where his beef with 50 first began.

"Nah, I'm not going to no show in Queens," Cam'ron said. "I don't know how true it is ... a few of my people -- associates -- said [some of 50's associates] was trying to reach out. But, I ain't going to no concert in Queens. Come up to Harlem Week. We could sit down and have the roundtable meeting if you really wanna be serious. Or meet anywhere ... we can meet in Benihana's if you wanna be serious. It don't matter. I'm not squashing a problem we had in Queens at your event." [The Boombox]

50 Cent may not be playing the Queens event, but he is playing the Beach on Governors Island on October 3rd. Tickets go on 'Internet Presale' today (Friday) at noon, and general sale on Saturday at the same time.

More importantly, if you haven't seen it already, check out the video of Mike Bloomberg discussing the "50 Cents" situation (and other related videos) below...