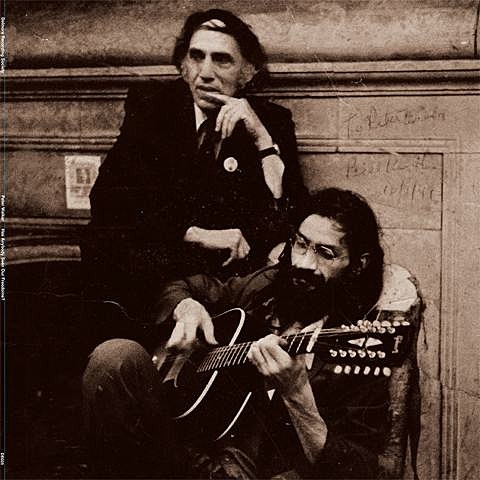 Peter Walker is one of those semi-famous '60s-era figures whose influence reaches further than his name. A disciple of Ravi Shankar and Ali Akbar Khan, as well as a close personal associate of the famed leftist lawyer William Kunstler (whom he's pictured with above) and Timothy Leary, Walker has lived a colorful globetrotting life that reads more like a myth than a musician's biography.

Walker recorded just two albums in the '60s and then stopped releasing music entirely for almost 40 years. Still, his fusion of American-style finger-picking with Spanish flamenco and Indian raga modalities resonated strongly enough with the likes of Thurston Moore and Jack Rose (the latter of whom he influenced substantially) that they convinced him to come out of retirement for a collaborative semi-tribute album in 2006. He released an entire album of new work, Echo of My Soul, the same year.

Walker continues to ease gradually back into the public eye. His third studio album, the 1970 one-take solo effort Has Anybody Seen Our Freedoms?, lay fallow for 43 years before he finally released it via Delmore Recordings in November. He's also playing his first NYC show in seven years (and his only show of 2013, evidently) at Union Pool on December 18, with support from local fixture Zachary Cale. Tickets are on sale now. If you ever nerd out on virtuoso acoustic guitar performance of the Rose / John Fahey / Leo Kottke sort, this show is a must-see.

Stream Walker's new album and an older tune below...