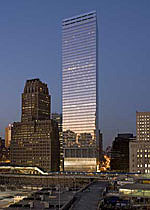 Lou Reed, Brazilian Girls, Suzanne Vega, and others, helped celebrate the opening of the new 7 World Trade Center in May 2006. The Hold Steady, Old 97's, M Ward, and others played (and are playing) free concerts there this week.

Free concerts are good, but is real estate developer Larry Silverstein? Not acccording to the many conspiracy theories floating around.

Larry Silverstein, the controller of the destroyed WTC complex, stated plainly in a PBS documentary that he and the FDNY decided jointly to demolish WTC 7 late in the afternoon of 9/11. In the documentary "America Rebuilds", aired September 2002, Silverstein makes the following statement;

"I remember getting a call from the, er, fire department commander, telling me that they were not sure they were gonna be able to contain the fire, and I said, 'We've had such terrible loss of life, maybe the smartest thing to do is pull it.' And they made that decision to pull and we watched the building collapse." [What Really Happened]

This of course is in sharp contrast to the official story, which is that the building came down on its own.

Larry went on to convince the courts that the 9/11 attack on the World Trade Center was in fact TWO ATTACKS. That means he profited on 9/11 by collecting 3.5 billion dollars in insurance money TWICE - for a total of 7 billion dollars. More on that conspiracy theory and/or fact (depending on how you look at it), at What Really Happened.