August was the month of "WAP," but "WAP" wasn't all the rap this fruitful month had to offer. We got treated to dozens of other great new singles, and a handful of great new projects too. Unfortunately, we're still waiting on the new Armani Caesar and Westside Gunn albums that were originally due for August but pushed back after the untimely death of Griselda producer DJ Shay, but we did get a great single from that Armani Caesar album (and two from Conway's album, which is expected in September). Black Thought's anticipated new album was also expected in August but pushed back at the last minute, but we got its excellent single ft. Pusha T and Killer Mike.

As for the rap albums/mixtapes/EPs we did get in August 2020, here's a roundup of eight that stood out to us most. Some of these have been reviewed in Notable Releases, and some of these are getting reviewed on BV for the first time right here. I also probably still missed or haven't spent enough time with some great July rap albums that aren't on this list. What were some of your favorites of last month? Let us know in the comments, and read on for the list (unranked, in no particular order)...

The social media and interview-shy Mach-Hommy gave his new album a release on a weekend without much promotion, and put it out digitally as a TIDAL exclusive and physically as a digipack CD for $99.99 (which is already sold out), a jewel case CD for $111.11, vinyl for $222.22, and deluxe vinyl for $444.44, so it's not too surprising that it's been taking Mach's Hard Lemonade a little bit of time to catch on. If you still haven't heard it, better late than never, because it's one of the strongest releases yet from this already-great, extremely prolific rapper/producer.

Like his other recent projects, Mach's Hard Lemonade favors brevity (the line between "album" and "EP" is very blurred when it comes to Mach-Hommy), and there's something very effective in our information-overload times about a 9-song, 22-minute album that never lets up and lends itself to replays. Mach-Hommy's production sounds bolder and richer than usual on this album, and his rapping is louder, clearer, and more attention-grabbing, but he hasn't abandoned the psychedelic, radically left-of-center sound that's made him such a cultishly loved artist in today's rap underground. ("Squeaky Hinge," the one song that's streaming outside of TIDAL, is a huge highlight production-wise.) Mach-Hommy wrote and produced the bulk of the music himself (with some co-writing by Preservation, whose great new album also features Mach-Hommy), and Mach is joined by guest verses from usual suspects like Earl Sweatshirt, Your Old Droog, Tha God Fahim, and Navy Blue. All the guests sound like naturals within Mach's universe, but the one who fits in most seamlessly is Your Old Droog, who goes line for line with Mach on "Pour House" and shows off the kind of chemistry that only happens when a yin finds its yang.

We don't deserve how prolific and consistently Boldy James and the Griselda crew have been this year. Boldy already released two full-length albums, The Price of Tea In China (produced entirely by The Alchemist) and Manger on McNichols (a live-band, jazz-rap album made with producer Sterling Toles), both of which are among the best rap albums of the year so far, and now he's got a third full-length, The Versace Tape, his debut for Griselda Records. It was produced by Jay Versace and executive produced by Griselda Records owner Westside Gunn, the latter of whom also releases his third album of 2020 this month, and there are even more Griselda albums on the horizon in the next month or so. Gunn and Griselda labelmate Keisha Plum appear on The Versace Tape's closing track "Roxycontin," which is as good as any of Boldy's collabs with the Buffalo crew this year ("Scrape the Bowl," "Claiborne Kick," "Buffs vs. Wires"), but other than that song and "Cartier" (ft. El Camino), Boldy handles all the rapping himself on The Versace Tape and he continues to be a force. As I said recently, his bassy delivery seems subdued on the surface, but once it sneaks up on you, it's deadly. If you've been keeping up with all the music Boldy already put out this year, his voice is probably already drilled into your brain, and The Versace Tape sounds like the effortlessly great victory lap that you're entitled to run after dropping projects as impactful as The Price of Tea In China and Manger on McNichols.

Nothing's been the same since "WAP" dropped, and one of the many things "WAP" did was shine a light on Mulatto, the extremely promising Atlanta rapper who made a cameo in the video. Mulatto had a few EPs and mixtapes under her belt when "WAP" was released, but now she just released her debut studio album, and it's very, very good. Like "WAP," Queen of Da Souf is full of sex-positive anthems that are overflowing with charisma and confidence, and like both Cardi and Megan, Mulatto's a great rapper who fits in with modern trap but clearly takes notes from the louder, brasher late '90s / early '00s era. (Her album title presumably nods at T.I.'s "King of Da South," and these songs would very much appeal to fans of classic T.I.) Guest appearances come from stars like City Girls, Gucci Mane, and 21 Savage, the fast-rising Detroit rapper 42 Dugg, and early 2000s icon Trina, and Mulatto shines next to all of them. "Tried to sign Mulatto, but she was signed already," Gucci Mane raps on "Muwop," which flips his 2007 single "Freaky Gurl" and turns it into a right-now anthem, and it's easy to see why he's already kicking himself for snoozing and losing. She's got star power, great songs, and as she proves on the more serious, introspective "No Hook," she's no one-trick pony. 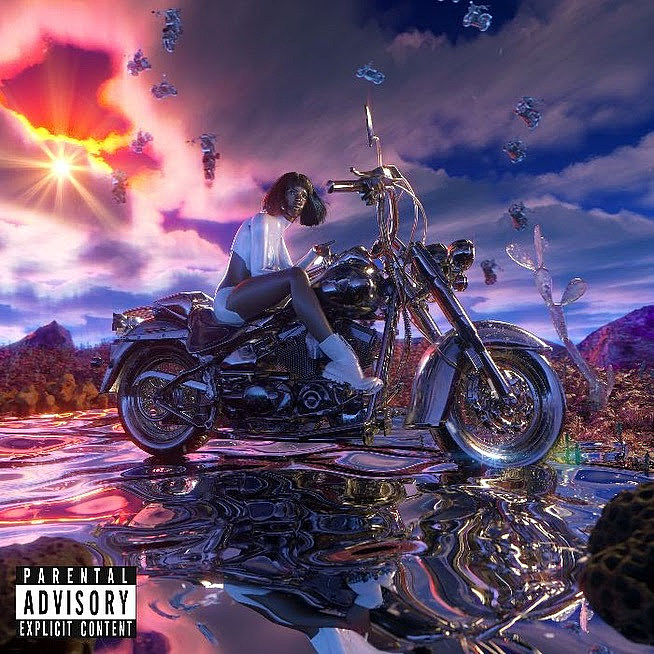 Music scenes and genres are less territorial and more fluid than ever, and in 2020, it's just not weird at all to see a rapper sign to 4AD, the iconic independent label that was initially best known for releasing goth, post-punk, and indie rock records by Bauhaus, Cocteau Twins, Dead Can Dance, Pixies, and more. Australia's Tkay Maidza is the latest hip hop act to join the label, and though she may be a different genre than the classic 4AD bands, her approach is similar. She's anti-commercial (but not inaccessible), uncompromising in her vision, and what she's doing really feels like something new. Her debut for the label is her new eight-song EP Last Year Was Weird, Vol. 2, which fuses trap beats, dance beats, syrupy funk, psychedelic soul, and more, and it's all led by commanding performances by Tkay, who's just as good at singing as she is at rapping. The only two guests on the EP are JPEGMAFIA and Kari Faux, both of whom are a great match for Tkay. All three have their own sound, but they share a vision for making forward-thinking, boundary-pushing hip hop, and if you like JPEG and Kari but haven't heard Tkay yet, let this EP change that.

Chattanooga, Tennessee rapper Bbymutha first caught a lot of people's ears in the mid 2010s as a frequent collaborator of experimental Philly producer LSDXOXO, and she then went on to drop a ton of EPs throughout the latter half of the '10s before finally putting out her first proper album -- a double album -- at the tail-end of August. She also says Muthaland will mark the end of her rap career, and if that's true, that's a huge bummer. Throughout this 25-track album -- which features Yung Baby Tate, Zeeloperz, Liv.e, and others -- Bbymutha offers up some of her best music yet. She often favors abstract, psychedelic production, but Bbymutha's rapping is clear-headed, direct, and focused, and she remains an immensely skilled rapper. It's a long album, but it doesn't drag. The whole album is full of quality material, and if this really is her last project, at least she's leaving us with over an hour of great new music.

Rich Slave is an album that's very much made for these times. It finds Young Dolph looking at the experience of being Black in America and offering up critiques on racism and police brutality and other strong, powerful messages. It'd be an impactful album any year, but especially in a year that saw all 50 states take to the streets to protest against police brutality at once. And as serious as this album gets, it's not afraid to have a little fun too. Guests include Megan Thee Stallion, G Herbo, and Key Glock.

It's been a while since we've seen a crossover Afrobeat star take off like Burna Boy, and not only is he increasingly popular, he's also highly prolific and basically everything he's touched lately has turned to gold. The past year has seen him release his excellent album African Giant, an EP with DJDS, standout collaborations with Beyonce and Stormzy, and more, and now he's already back with another highly accomplished full-length album. As ever, he breaks down barriers between genres and regions in a way that feels entirely natural. Diddy co-executive produced it, DJDS reprise their role on opening track "Level Up (Twice As Tall)," and other beats on the album come from a mix of Nigerian producers, American hip hop producers (Timbaland, Mike Dean), and UK hip hop (J Hus collaborator Jae5). Guests vary between African legend Youssou N’Dour, US rap vets Naughty by Nature (on a song also called "Naughty by Nature"), current grime king Stormzy, Coldplay's Chris Martin, and Kenyan Afro-pop group Sauti Sol. They all bring their own unique styles to the album, but Burna Boy always remains the star of the show and he makes everything fit into his world. African polyrhythms, reggae, funk, IDM, rap, R&B balladry, and so much more swirl together throughout this album, and Burna Boy delivers it with both starpower and artistic innovation. It's "pop" in the sense that it's accessible and would've had no trouble filling the very large venues Burna Boy was supposed to play on his 2020 North American tour that didn't happen, but not in the sense that anything is formulaic or predictable. Burna Boy remains a visionary, and if he keeps going at this rate, then we're probably still far from seeing him reach his full potential.

Ho99o9 have been blurring the lines between real-deal rap and real-deal punk, rock, and metal for a few years now, and they've been putting out some pretty amazing collaborations lately too. They recently teamed with blink-182's Travis Barker to cover Bad Brains on a livestream, and today they released a new mixtape that they made in quarantine, Blurr, which features Eyehategod frontman Mike IX Williams on closing track "Firefly Family." It's a ripper, and Mike fits right in with Ho99o9's sound. The album also features Pink Siifu (on the song "Movie Night"), whose own 2020 album NEGRO pulls from both rap and punk, and N8NOFACE (on "Flesh 'N Blood"). As you'd expect from this group, the mixtape constantly hops between genres without ever losing focus. It's got stuff that could appeal to fans of anything from Flatbush Zombies to Denzel Curry to Death Grips to Nine Inch Nails to Godflesh to Bad Brains to Integrity to plenty of other music from all across the board. It's wild stuff, and it also comes with a video for the entire 34-minute mixtape.

Past monthly rap album roundups here. For more hip hop, stay up to date with our weekly rap and R&B song roundups, and read our daily hip hop coverage here.